I am honoured by the nomination to serve APS in the capacity of International Councillor. If elected, I believe I will add further value to APS in this capacity as someone who thinks ‘out of the box’ and contributes to such a global scientific platform as APS, whose underlying mission includes “advocating for physics and amplifying the voice of science” in making an impact on society.

My overall background in the field of physics with a global network of collaborating experts and counterparts, coupled by my strong passion for freedom of science, allows me to influence policy-makers to advance the global cause of scientific research and development. I also have been contributing to improving education, particularly in South Africa, and to some extent across the continent, through my current appointment as Managing Director of one of the largest research facilities in the southern hemisphere. Among others, one of my priorities would be to bring a larger African contribution to APS to further increase APS’s impact and broaden its footprint into African science and development initiatives. To this effect, building a solid bridge between the African Physics education and APS, and elaborating a cogent strategy in increasing dual degrees between African and US universities, as well as joint degrees supervision are only some of the examples of initiatives that could go a long way to enhance the impact of APS on the African continent.

All throughout my career I have always endeavoured to create a bridge among scientists all over the world, across different fields, and from a variety of cultural backgrounds and geographic regions. I deeply believe that sharing different ways of thinking brings out the best from within us all as a prerequisite for flourishing scientific discovery and technological innovation. Being a societal product of many cultures myself (born Tunisian, brought up in a Francophone environment, established a career in France and recently in South Africa in my current role as the managing Director of iThemba LABS) gives me the needed background and experience to achieve these goals.

I understand fully how my African physics colleagues eagerly want to catch up with the worldwide fast-paced trend of scientific research and technological developments. Using positions of influence within Councils to harness people’s talents in erecting infrastructural and developmental bridges between, for example, APS, Africa, and the rest of the world allows for this win-win international collaboration scheme.

I firmly believe that we all need to keep inspiring the young generation to follow careers in the physical sciences and to actively advocate gender equality and equal opportunities. I strongly believe that scientific fields should become more and more “borderless” as interdisciplinary research efforts become multiplied for the greater enrichment and benefit of the global scientific enterprise. 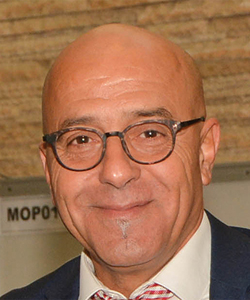