I am humbled by the accomplishments and the bold plans espoused by my old friends and colleagues Past President Phil Bucksbaum and President Jim Gates, especially in the areas of Public Policy and the Climate of Physics, respectively. Two pinnacle events that impact our community today are the COVID-19 pandemic and by introspection the deaths of African Americans George Floyd, Breonna Taylor, and many others at the hands of police. A Society of 55,000 members strong, APS has instituted programs to address issues of diversity, equity, and inclusion over the years. I have been a proud APS member since I was a graduate student in the late 1970s. My very first APS nomination, while a researcher at Bell Laboratories, was as a Member of the Committee on Minorities (COM) in Physics (1991) followed by Chair of COM in 1992-1993. As Chair, I had the pleasure of working with Bunny Clark, Chair of the Committee on the Status of Women in Physics (CSWP), and we started joint functions at the March and April Meetings. In addition to my early advocacy for diversity in APS, I was a Member and Co-Founder, along with friend and colleague Elsa Garmire, of the OSA Ad Hoc Committee on Women and Minorities in Optics in 1988. Since I am discussing history, my initial interest in diversity and pursuing a PhD in Physics can be traced back to a fabulous summer in 1974, where I worked with my mentor and PhD co-thesis advisor David H. Auston in the inaugural year of the Bell Laboratories Summer Research Program for Women and Minorities. Clearly, we must continue to make a special effort to attract more women and members of minority groups who are underrepresented in our profession and who will be an increasing fraction of the coming generation of students.

I have served as President of the OSA in 2002, on the APS Executive Board twice over the years, on the Executive Committee and Representative to APS Council of the Division of Laser Science (DLS), as Chair of the Bridge Program’s National Advisory Board, and had the distinct pleasure of serving on the Search Committee that nominated my longtime friend and colleague Kate Kirby to Executive Officer, in addition to serving on too many APS committees to list here.

In these austere times, academicians, industrial researchers, and members of government labs are finding it increasingly more difficult to find the resources to pursue the exciting frontiers of fundamental and applied physics. We need to select those energetic and outstanding candidates that can help foster and maintain the vitality of our field–including the necessary dialogue on stagnant and dwindling resources. APS Officers need to be at the forefront of physics research but also need to have the ability to articulate the excitement of physics to the general public and our colleagues on Capitol Hill. With over 25% of the APS membership living and working outside the US, an awareness of outstanding international candidates is also clearly warranted.

The first 14 years of my career were in the Research Division of AT&T Bell Laboratories, before joining New Jersey Institute of Technology (1995) as Chairperson and Distinguished Professor of Physics until 2003, when I joined UMBC. I was Program Co-Chair (1990) and General Co-Chair (1992) of the Conference on Lasers and Electro-Optics (CLEO); Editor-in-Chief (1995-2001) of Optics Letters; 2002 President of the Optical Society; Deputy Director of the NSF Engineering Research Center MIRTHE (Mid-Infrared Technologies for Health and the Environment) (2006-2016). An early advocate of diversity, I was Chair of the APS Committee on Minorities in Physics (1992-1993). 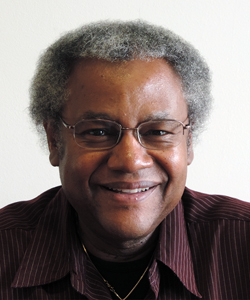