Physics is going through an exciting transition. It is diversifying its science and its participation.

New scientific fields are now including areas such as biological physics, material sciences, and information theory. Also, connections between basic science physics and new technologies are becoming much more frequent and occurring in shorter time intervals. The more established areas of physics are also achieving great new discoveries recently. Both of these developments are transforming the current Physics landscape into many impressive new directions.

The diversity in participation is also increasing in our physics community and this additional talent and life experiences are helping with what we can scientifically achieve and how we can impact society at large. There is a need to increase the number of women and underrepresented minorities in our physics community. Although some successes have been accomplished towards this goal, much more is necessary. The future of physics requires improving diversity and as members of the American Physical Society, we all have to work harder towards this goal.

If chosen as the Chair-Elect of the APS Nominating Committee, and continuing as Chair of the APS Nominating Committee, my goal will be to make sure that APS strongly focuses on the two diversity goals described above. Diversity in participation and diversity in science will play a major role in future successes in physics and the American Physical Society has to be a key player in this effort. To achieve such goals, it is essential that we consult and recruit from the communities involved in these different aspects of diversity. The involvement of physicists that are members of new areas of physics needs to be increased. The synergy between the new advances in established areas of physics and the newcomers will give rise to very exciting scientific developments. The diversity in participation is an even bigger challenge. We need to make sure that we have a strong presence in all segments of our society! We cannot afford not to incorporate all the different talents, different perspectives, and different creativities that come from a broader participation. This synergy will play a central role in the future of physics and APS should participate in guiding this transformation.

Finally, I cannot sufficiently stress the importance of making the nominating committee accessible to the entire APS membership. Your participation, suggestions, and criticisms are essential to guide the APS leadership to mold the future of our society. The American Physical Society is all of us and therefore we all have the right and obligation to shape our future.

In addition to being the Harry C & Olga K Wiess Professor of Physics and Astronomy, José Onuchic is also Professor of Chemistry and Biosciences at Rice University and the co-Director of the NSF-sponsored Center for Theoretical Biological Physics. His research looks at theoretical methods for molecular biophysics, chromatin structure/function, and gene-networks with applications to cancer. Because of his cancer research, he is CPRIT Scholar in Cancer Research. 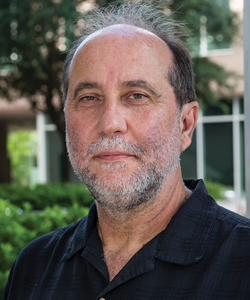