The Nominating Committee plays a crucial role in the governance of APS. The committee determines the slate of candidates for the vacant positions of the General Councilor and International Councilor, and for the Treasurer, the Chair-Elect of the Nominating Committee and the Vice-President (that is, the president-elect of APS). Recent events have sadly but dramatically illustrated the importance of the positions. The painful but correct decision to cancel the March, and then April, meetings of APS required wisdom, leadership and the courage to make a real-time response on the basis of limited information. This decision, made in consultation with APS senior staff, has been described by at least one colleague as life-saving.

It is the fervent hope of all of us that in the future, while striving to overcome the societal conditions which so challenge us, the work of APS can again concentrate on its fundamental mission to advance and diffuse knowledge of physics for the benefit of humanity. This can be done most effectively if the leadership of APS is representative of the broad diversity of APS membership, as measured across the wide spectrum of parameters that define each of us as individuals. If elected, I will commit to learning the best practices for identifying qualified candidates from the current Chair and the committee members. I will also seek the input of all members, and that of APS staff. During my time in the DNP chair-line, and as Program Chair of the April 2012 meeting, I developed a deep appreciation for the dedication and commitment of APS staff who work behind the scenes to make the American Physical Society the premier scientific institution that it is. Now, more than ever, APS leadership must continue to effectively represent our discipline and aspirations to both national and international partners, to the funding agencies, and most importantly to the general public. 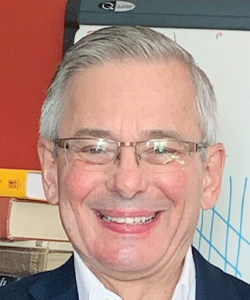