The nano world is getting brighter. Nanowires made of semiconductor materials are being used to make prototype lasers and light-emitting diodes with emission apertures roughly 100 nm in diameter—about 50 times narrower than conventional counterparts. Nanolight sources may have many applications, including "lab on a chip" devices for identifying chemicals and biological agents, scanning-probe microscope tips for imaging objects smaller than is currently possible, or ultra-precise tools for laser surgery and electronics manufacturing.

Researchers at the National Institute of Standards and Technology (NIST) are growing nanowires made of gallium nitride alloys and making prototype devices and nanometrology tools. The wires are grown under high vacuum by depositing atoms layer by layer on a silicon crystal. NIST is one of few laboratories capable of growing such semiconductor nanowires without using metal catalysts, an approach believed to enhance luminescence and flexibility in crystal design. The wires are generally between 30 and 500 nanometers (nm) in diameter and up to 12 micrometers long. When excited with a laser or electric current, the wires emit an intense glow in the ultraviolet or visible parts of the spectrum, depending on the alloy composition. 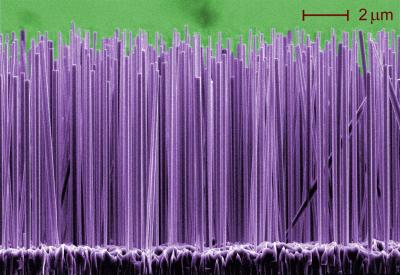