HERCULES laser, which takes up several rooms at the University of Michigan's Center for Ultrafast Optical Science,  is the most intense repetitive laser in existence.  HERCULES's laser beam's power is concentrated to a micron speck about 100th the diameter of a human hair.

HERCULES's  design is based on chirped-pulse amplification.  The Petawatt stage of HERCULES was activated in 2007 and reached power of 300 TW. The output beam with this power after the adaptive optics is focused to approximately 1 micron spot size using high numerical aperture parabolic mirror producing unprecedented intensity of 2x10^22 W/cm^2 but for duration of only 30 fs (1 fs=10^-15 s). The HERCULES power will be gradually increased to 500 TW by the end of 2008.

Researchers, all from the University of Michigan, include Karl Krushelnick and  Yanovsky , co-principal investigators, Vladimir Chvykov, and Galina Kalinchenko. 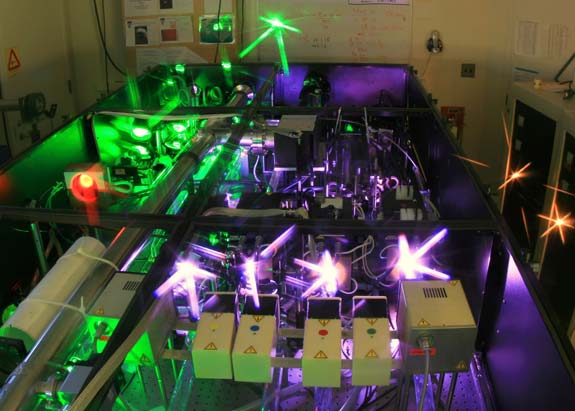 The larger image of the HERCULES shows the entire Petawatt amplification stage of the Hercules while the pump lasers are being fired. The pump beams are green, the final titanium:sapphire amplifier is red, and the pump lasers are purple. The detail image shows three of the four HERCULES pump lasers before they double in frequency and pump the titanium-sapphire crystals.