Flow Pattern on a Hydrofoil

Despite their size, humpback whales are quite agile.  Studying humpback agility experimentally offers benefits for many potential applications in biomimetically-engineered systems.

These experiments were carried out in a water tunnel.  Dye was released from ports on the leading edge of the hydrofoil. The dye streams originating from the peaks and troughs remain coherent (the straight lines) and flow downstream until they breakup.

On the other hand, the dye streaming from the ‘shoulders’ of the protuberances rolls up into spirals which mark vortexes in the flow direction. As the hydrofoil pitches up, the strength of these vortexes increases. 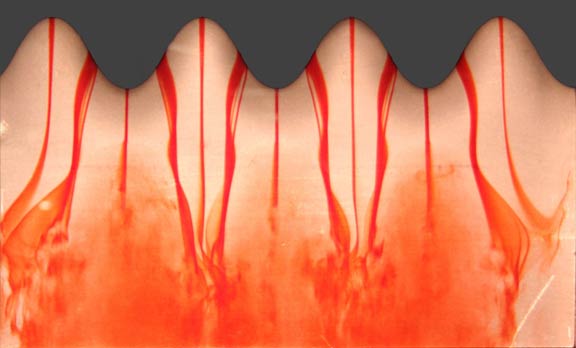 This research was performed in collaboration with Dr. Charles Henoch and Derrick Custodio, and sponsored by the United States Office of Naval Research.