Nondestructive method may be useful in quantum computing and communications 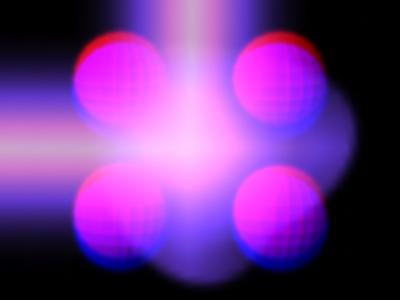 Physicists at the Commerce Department's National Institute of Standards and Technology (NIST) have taken a significant step toward transforming entanglement—an atomic-scale phenomenon described by Albert Einstein as "spooky action at a distance"—into a practical tool. They demonstrated a method for refining entangled atom pairs (a process called purification) so they can be more useful in quantum computers and communications systems, emerging technologies that exploit the unusual rules of quantum physics for pioneering applications such as "unbreakable" data encryption.

The NIST work, reported in the Oct. 19, 2006, issue of Nature, marks the first time atoms have been both entangled and subsequently purified; previously, this process had been carried out only with entangled photons (particles of light). The NIST demonstration also is the first time that scientists have been able to purify particles nondestructively. Direct measurement would destroy the delicate entangled state of atom pairs; the new experiment gets around this problem by entangling two pairs of atoms and measuring only one pair.

Entanglement is a curious property of quantum physics that links the condition and behavior of two or more particles, such as atoms or photons. Entanglement can occur spontaneously when two atoms interact. For the initial interaction, the atoms have to be in close proximity, but the entanglement may persist even if they are physically moved apart. The quality of the entanglement can be degraded by many environmental factors, such as fluctuating magnetic fields, so the process and the transport of entangled particles need to be tightly controlled in technological applications. The purification process implemented at NIST can clean up or remove any distortions or "noise" regardless of the source by processing two or more noisy entangled pairs to obtain one entangled pair of higher purity.

"We demonstrated entanglement purification with relatively high success rates in an ion trap system that could be scaled up to build quantum computers of a practical size," says Dietrich Leibfried, an author of the paper and designer of the experiment. "It's a more complicated procedure than anything we've demonstrated before, and it will be useful in many contexts once we improve our purification procedures."

The NIST team used ultraviolet lasers to entangle two pairs of beryllium ions (electrically charged atoms) in an electromagnetic trap. A similar process was used to cross-entangle the entangled pairs—that is, to entangle each member of the first pair with its counterpart in the second pair. Then the first pair of ions was measured, and the results were used as an indication of whether the second pair (unmeasured, and thus with its quantum state intact) was entangled with higher purity. Additional tests were performed to verify that the quality of the entanglement had indeed improved.

The reported purification rate is a record (although the entangled state is not yet pure enough for use in a working computer or other device) with more than one success for every three attempts, compared to one in a million in the photon experiments. Theoretically, the NIST process could be enhanced and then repeated as many times as necessary to create a stream of near-perfectly entangled pairs in a computer or network. The NIST team's continuing research aims to substantially improve the purification operations through, for example, improved control of magnetic fields and laser intensity.

The same NIST group previously has demonstrated at a rudimentary level all the basic building blocks for a quantum computer, including key processes such as error correction and, most recently, a mass-producible ion trap. Ions are among the most promising of a dozen or so candidates for quantum bits (qubits) to store, manipulate, and transport quantum information.

Entanglement could have many uses in large quantum computers and networks. For example, it is required for "teleportation" of information, a process that could be used to rapidly transfer data between separate locations in quantum computers, or to detect and correct minor operational errors. Entangled photons are used in various forms of quantum cryptography, and are the clear choice for long-distance communication.

Purification is crucial because particles can be entangled initially only when they are close together, and the link degrades as the particles are moved apart. The NIST process could be used, for example, to purify entangled ions before transfer of information to photons in large networks. Most long-distance quantum communication schemes require data transfer from storage qubits to transport qubits. "If someone comes up with an interface for efficiently transferring information from ions to photons, then ions could be used for purification and photons for transport," Leibfried says.