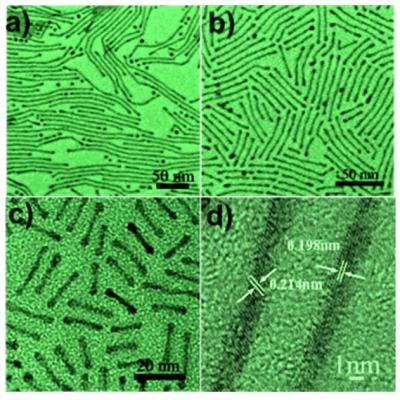 A team of chemists at Brown University have devised a simple way to synthesize iron-platinum nanorods and nanowires while controlling both size and composition. Nanorods with uniform shape and magnetic alignment are one key to the next generation of high-density information storage, but have been difficult to make in bulk.

The technique, published online June 22 in the journal Angewandte Chemie International Edition, produces nanorods and nanowires from 20 nm to 200 nm long, simply by varying the ratio of sol-vent and surfactant used in synthesis. Shouheng Sun, a professor of chemistry at Brown University, postdoctoral researcher Yanglong Hou, and colleagues have also demonstrated that the same technique works to control the shape of cobalt-platinum nanorods, suggesting that it may work for many other combinations as well.

Just a few years ago, the average computer user’s documents, applications and even photos seemed to rattle around a 120 GB disk drive. Today’s multimedia-intensive user can exhaust that capacity in no time and the need continues to grow, but engineers expect to max out conventional magnetic storage techniques by about 2010. At that point, they’ll be looking for nanotechnology to step up. Whether it will be ready, remains to be seen.

Getting tiny magnetic particles to align with each other has been one of the major obstacles to squeezing more information density out of the technology. Sun and Hou think they can harness particle shape to accomplish that critical task.

“Many people think that shape can control alignment,” said Sun, “but controlling shape has not been so easy. This method gives us a really simple way to tune length, diameter and composition all at the same time.”

A magnetic storage surface — the disk of a hard-disk drive — consists of tiny sectors of magnetically-aligned particles. When the read-write head of a disk drive passes over a sector, it flips the magnetic field to the opposite direction — encoding a zero or a one. When it reads, it senses the magnetic field for the whole sector. To pack more information into a smaller area, engineers can make the particles smaller or the sectors smaller, but they need enough particles so that the occasional random flip doesn't corrupt the whole sector.

It is now possible to apply magnetic nanoparticles in a thin, dense layer, but the magnetic fields of randomly-oriented spherical particles tend to cancel each other out. Instead of lining up at six o’clock or twelve o’clock, many particles align at two, three, four or five o’clock, diluting the overall strength of the magnetic signal.

Long, narrow nanorods could pack alongside each other, with their magnetic fields oriented in only two directions. Imagine a plate covered with Good and Plenty’s rather than fireballs. The elongated candies line up side-by-side, while the balls role around randomly. Nanorods, aligned in the same direction, should produce a stronger signal and switch cleanly from zero to one and vice versa.

The method developed by Sun, Hou, and graduate students Chao Wang and Jaemin Kim produces batches of similarly-sized nanowires or nanorods in solution. The researchers found that including more surfactant (oleylamine) in the reaction mixture produced longer wires and that more solvent (octadecene) gave shorter rods. A three-to-one ratio of surfactant to solvent yielded 100 nm wires, while a one-to-one ratio produced 20 nm rods.

Based on this pattern, plus transmission electron microscope and x-ray diffraction images, the researchers think that surfactant molecules create protective tunnels around the growing nanorods, guiding them into longer, rather than thicker shapes. The surfactant molecules line up with water-loving tails inward and water-repellant heads out. With more surfactant in the solution, the tunnels (and the nanorods inside) grow longer before solvent molecules interrupt the pattern.

In addition to information storage, the method has great potential in other areas where very dense magnetic charge is an advantage, including magnetic motors and generators. The stability and biocompatibility of the iron-platinum alloy also make such nanorods and nanowires good candidates for biological applications.

For more information, read the full article: A General Strategy for Synthesizing FePt Nanowires and Nanorods