Find out more about this and other physics images by Eric J. Heller online at Resonance Fine Art. 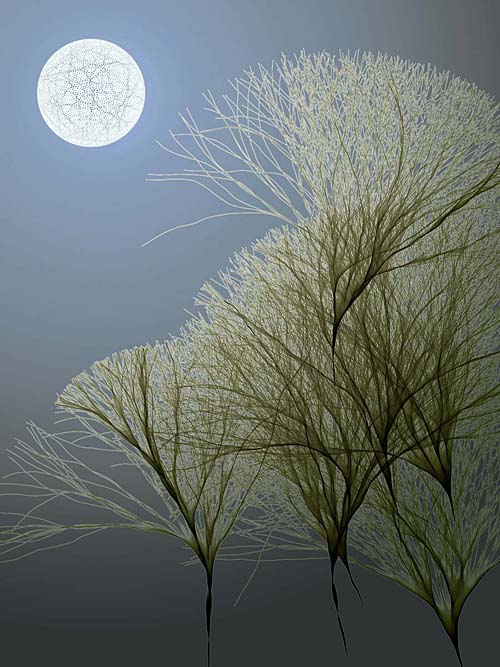 In the lower right, short semiconductor electron tracks are recorded from several different starting points, in a simulation of electrons suffering random weak deflections caused by nearby positively charged "parental" donor atoms. The donor atoms, which live in a plane layer, supply the electrons to their nearby layer (the plane of the image). The positive donor atoms are not uniformly distributed and as a result there are regions of hills and valleys in the forces the electrons feel. Even though he are confined to the two dimensional layer, there are forces attraction the electrons to clusters of positive charge lying in the nearby donor layer. The charge variations cause the electron paths to be unstable to small changes in their initial direction, so that many electrons beginning at the same spot and heading in almost the same direction fan out in a short distance, as small variations in direction grow larger. The instability of the pathway to small changes in initial direction is one of the hallmarks of chaos.

Another manifestation of chaos is seen in the moon. On its surface is a quantum wavefunction representing chaotic motion of a particle on its spherical surface. The wave represents the probability of finding the particle, with darker regions corresponding to more probability.