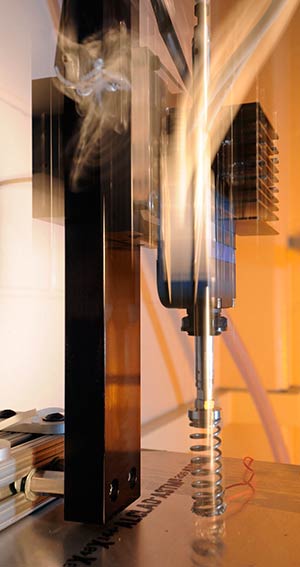 When physiologists and roboticists study the process of jumping, they usually include as much of the complexity of real human or robotic legs as possible. But physicists at Georgia Tech in Atlanta took the opposite approach, using a simple model consisting of just a vertical bar with a spring at the bottom and a motor that could be programmed to rapidly climb up and down the bar by millimeters at a time.

The researchers found this surprising result with two different jumping modes: one was equivalent to a person squatting down and then extending their legs; the other was a slower motion, like a person lifting their feet almost off the floor before bending their legs and pushing off the floor. This "stutter jump" is similar to a common move in basketball. The researchers' mathematical model points the way to better robotic design and a better understanding of the movement of living creatures.


This image shows the robot jumping.

Videos of the Jumping Robot in Action