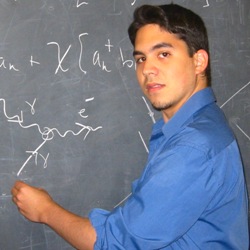 Finding His Place in Physics
Alejandro was born in Havana, Cuba into a family of physics enthusiasts who cherished Afro-Cuban folklore and loved to rumba.  Alejandro’s own love for physics began when he was a sophomore in high school and realized that physics could tell him “how everything worked.”

The Fun Side of Physics
In college, Alejandro “began to realize that some problems simply could not be solved by pen and paper alone” and required more complex models.

Developing models led him into the world of computational physics to make computer simulations that can describe some of the most complicated characteristics of nature. Alejandro finds great pleasure in creating models based on classic physics theories and using a little bit creativity in his projects.

Opening the Doors for Innovation
With today’s technology moving towards slimmer and smaller products, new problems come up in keeping these little products working. One major problem in getting electronics such as iPods and cell phones to work well is the effects of Casimir forces which only affect objects that come very close to contact and causes the tiny parts to stick together. Because of the growing popularity of portable and convenient electronic devices, the effects of Casimir forces have come to play a big role in the functionality of a device.

Currently, Alejandro is doing research as a postdoctoral fellow on Casimir forces and developing a way to solve Casimir-force equations for a variety of objects without having to consider their shape and size. His work hopes to make the impossible possible: exact calculations of the Casimir forces between objects that are very tiny.

Alejandro and his research group use models where the objects that are put in an electricity-conducting liquid are much larger and much further apart in order to simulate the effects of Casimir forces between the tinier objects. Because these larger models have been proven to produce the same effects as the actual small objects, Alejandro has made it easier to observe the effects of actual Casimir forces through the use of larger models and has eliminated the difficulties of finding information based on smaller objects.

With Alejandro’s calculations and models, they can now look for different shapes that would reduce sticking of the small objects and allow the smaller electronic devices to work better. Essentially, Alejandro’s research will change the design of technology and improve the functionality of modern technology.

Talk to People Around You
Working and interacting with people is Alejandro’s main strategy for success. One area where Alejandro sees students making a big mistake is in trying to study physics on their own. Physics is a discipline that requires working with others and many students, particularly minority students, think they can do it all alone. Alejandro is always open to scientific collaboration and often works with departments and people outside of his field.

Scientific collaboration is one of the advantages of studying physics, Alejandro says. It allows you to master basic scientific concepts and makes it possible to communicate with a wide range of people, like chemists and biologists. “Being open to people around you is extremely important. Most of what I learned in grad school arose from my interactions with people around me,” he says. “People are the biggest resource you can find anywhere.”

“I’ve seen minority students shy away from really engaging their peers and professors,” he says, “but schools understand the value of having a diverse pool of applicants and are starting to do a much better job of engaging them.” Alejandro encourages students to tap into that resource, open themselves up, and talk to professors and fellow students.
Engage in Research Early
Alejandro suggests students expose themselves to the excitement of research early. “Research gives you a purpose and demonstrates that what you’re studying is not an abstract thing. It’s tangible and has practical consequences,” he says.

Go Into Class with an Open Mind
Studying physics also involves studying math. That’s why Alejandro urges students to study as much math as possible. “Learn the basics of various fields in mathematics that are seldom introduced in high school,” he says. “Having a basic math background comes in handy in physics and other fields as well.”

Though many students may get a little nervous as they get to more advanced physics and math classes, Alejandro encourages students who want to know how our world works to keep learning and to persist.  He says, “Physics can be difficult, but there is a reward at the end. Don’t be discouraged.”