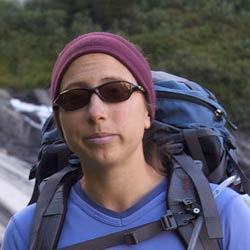 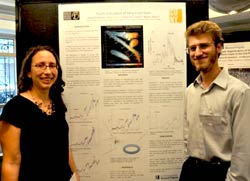 It Started With the Stars
When Kelle Cruz was a teenager, she started to think about big questions, like why am I here? What is it all about? She remembers going camping gazing at the stars and wondering about questions like these. When she was a junior in high school, she decided she wanted to become an astronomer.

Kelle and the Brown Dwarfs
Kelle now studies a kind of celestial body called brown dwarfs to better understand planets outside our solar system. She is an assistant professor at Hunter College in New York, where she also continues her work on brown dwarfs.

Since brown dwarfs and massive planets share many properties, like temperature and mass, insights into the physical properties of brown dwarfs will help to understand planets, Kelle says. Recently, she had the chance to use both the Palomar and Keck observatories to collect data on suspected young brown dwarfs.

When she’s not working, Kelle spends a lot of time playing tennis.  She had the opportunity to travel to England and Scotland for a conference, and also vacationed in Italy for a few weeks between her post-doctoral fellowship at the California Institute of Technology and her current faculty position.

“My work focuses on very small stars in our Solar Neighborhood,” Kelle says. “I hope that what I’m doing in our little bit of the galaxy is similar to what the explorers did by discovering and mapping the New World and North America.” Although her work might not have any immediate implications, “it could be very important 500 to 1,000 years from now if/when interstellar space travel becomes possible,” she says.

Kelle loves the independence that her degree in physics has given her. She gets to pick her activities based on personal choice and interests. She enjoys the freedom of essentially being her own boss and has a lot of free rein in her work. “I decided early on that I never wanted to make money by making other people money and my physics degree has enabled me to accomplish that goal,” she says.

Play the Game
A big part of succeeding at any career is working your degree to your advantage. “Like any profession, it’s important to network and market yourself as a scientist. You owe it to your accomplishments to tell as many people about them as possible,” Kelle says. Although many people find self-promotion uncomfortable, it’s a necessary skill that can serve you through your entire career. “It is key to getting the job you want, for getting access to resources, and for winning funding proposals,” she says.

Invest in Your Future
Don’t let finances stop you from applying to college! Look for schools that offer need-based financial aid, Kelle says, “and if you’re not happy with the package offered to you, don’t hesitate to get in touch with them and see if there’s any more they can do.” She recounts that the financial aid package the University of Pennsylvania initially offered her was not very generous because of a mistake made in filling out a form. It was only after personally getting in touch with the financial aid office and explaining her situation that everything was straightened out.

Once you do get accepted into college, don’t be afraid to take loans. Kelle stresses the difference between “bad debt” incurred by spending too much at the mall and “good debt” accumulated by investing in your future.

“Student loans are almost always a good investment,” she says. “Have the courage and faith in yourself to be confident that you will be successful enough to pay them back without too much difficulty after graduation. You are worth it!”

Brown Dwarfs
Are known as the “link” between stars and planets. They are too massive and hot to be planets, but don’t have enough energy to be true stars, so they are somewhere in between. Like stars, they form from a collapsing cloud of gas and dust, but unlike stars, this cloud isn’t dense enough to cause the nuclear fusion that fuels a star and makes it shine.