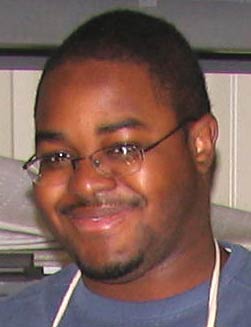 Collin advises building relationships with people who can help you advance your career. 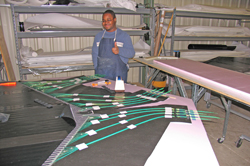 Collin working on fiber optics for detectors at Fermilab

Physics Let's You Experiment
After graduating from Yale in May 2008, Collin Joseph worked as a lab technician at Hampton University, building detectors for Fermilab, which houses the world’s second-highest energy particle accelerator in Batavia, Illinois.

Collin built detectors for MINERvA, an experiment that’s designed to learn more about neutrinos. He helped implement a new process of adhering the fiber optics that carry data to connectors for photomultiplier tubes (PMTs).

Collin was looking for more hands-on training after graduating, and his lab technician experience taught him a lot about how large experiments work.

Enjoying the Variety
Although Collin enjoyed his work in experimental particle physics at Hampton, he decided he wanted to pursue soft condensed matter or biophysics in graduate school.

Now, Collin is excited to have a year of graduate school at UCLA under his belt, where there are multiple opportunities in biophysics.

Since biophysics combines the physical and biological sciences, there’s really no limit to what researchers might study. This interdisciplinary field touches on topics from genetics, molecular structure, and protein synthesis to statistics, infectious diseases, and forensics.

Biophysicists are involved in a wide range of projects, from researching medical imaging technologies like MRIs and CAT scans to exploring innovative ideas such as creating biofuel using modified microorganisms to replace gasoline and diesel fuel.

What Else Collin Enjoys
When he’s not busy with studying, Collin enjoys playing the piano and reading. Recently, he’s developed a passion for cooking. His new love and skill might have come about from living on his own, but it’s not surprising given the importance of cooking in Caribbean culture.

It doesn’t hurt that both of his parents are good cooks! “I’ve hosted a few dinners, though I have still to master many of my father’s specialties,” Collin says.

Talk to Your Advisor
Collin stresses the importance of developing a good relationship with your advisor. “Physics is a relatively close knit community of people,” he says. Because of this, most jobs at the technician and postdoctoral levels are filled with the help of personal recommendations.

When Collin was looking for a position after graduation, his advisor was able to put him in touch with people looking for technicians. This led him to the year-long position at Hampton University.

Listen to Your Advisor
Advisors can also point students in the right direction when it’s time to apply to graduate schools. Collin says it’s really important to know how graduate schools work.

“Unlike when applying to an undergraduate program, the big name schools are not necessarily the ones you want to go to,” he cautions. Advisors can give students tips on what schools might be best for their particular areas of interest.

Know Your Resources
Collin knows that minority students face several challenges when pursuing physics careers, beyond where to apply and what field to pursue.

“Since there are very few examples for minority physicists, most minority students don’t have as comprehensive knowledge about what is possible with a physics degree, and how the field is structured,” he says.

Research Resources
Because of there are few examples for minority physicists, Collin really appreciated the many opportunities and advantages that he has had, like the APS Minority Scholarship and the mentorship of an excellent advisor.

Collin also benefited enormously from the Mellon-Mays Fellowship, which plugged Collin into a community of minority students to discuss with and learn from. There are always resources available if you know where to look, and like Collin, you can succeed as a physics major!

MINERvA
MINERvA is a neutrino scattering an experiment that measures neutrino interactions and how the nucleus affects these interactions. The acronym stands for Main Injector Experiment for ν-A.

Neutrinos
Neutrinos are small, neutral particles that travel at the speed of light and pass through matter without interacting with it. They are usually generated during radioactive interactions like supernovae.

PMT
The MINERvA detector is placed in a beam of neutrinos. When the neutrinos interact with the detector, photons are created and sent to photomultiplier tubes (PMTs). The light is eventually magnified, converted into a digital signal, and written to disk.

Biophysics
Biophysics is a bridge between biology and physics.