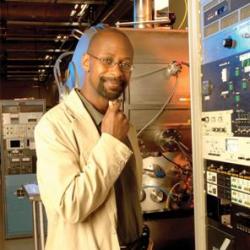 A Growing Interest
Paul’s interest in science and math started at an early age. When he reached high school, he finally got the chance to experience the connection between science and math when he took his first physics class.

“Suddenly having an ability to explain the things I’m seeing around me with physics, like why a car goes, was really exciting to me; to be able to put that down in numbers and equations,” Paul said.

Also, he was introduced to physics by a quality teacher who “wanted the class to be about learning the material and figuring out how things worked in the world, and not about competing for grades and trying to be the best of the best.”

Broader Viewpoints
When Paul started college, he thought that he would pursue a major in engineering. But after a few engineering courses, he decided that he wanted to study something broader, and so he chose physics.

Paul believes that his physics background broadened his career options and would help him succeed in a number of different fields. In addition to making him versatile, studying physics gave him an invaluable skill.

“You get that ability to walk into strange situations, unfamiliar situations, and think from what I call basic principles; to use a basic understanding of how the world works in order to solve the problem,” says Paul.

The Physics Behind Everyday Electronics
Could you use physics to make an MP3 player hold more songs? How about generating electricity from the sun with something far thinner than a human hair?

For Paul Markoff–Johnson, the answer to both these questions is yes.

Paul has spent most of his career working on creating incredibly thin coatings made of materials selected for their special abilities. To get an idea of how thin these coatings are, imagine slicing a dime horizontally into a thousand slices. The coating would be as thin as just one of those slices!

The material Paul picks for a coating depends on what he wants the coating to do. In disk drives and disks, like those used in iPods, the coatings must have magnetic properties to create many tiny magnets inside the devices for storing huge amounts of information. Paul knows which materials to pick for these coatings because of his studies in physics.

Creating Advanced Technology
Although Paul spent much of his career in disk drives, he recently moved into a new field—solar power. For solar cells, he needs materials that generate electricity when the sun shines on them. His goal is to use thin-film technology to create less expensive solar cells. Making the cells cheaper would make solar power much more affordable and much more likely to be widely used.

Paul’s application of physics to creating functional solar power technology would help clean up the environment and preserve the natural resources on Earth. Paul says, “If I’m successful, if this industry is successful, we will have changed the world for the better.”

Cherish the Teachers that Genuinely Care
Paul’s career is rooted in his knowledge of essential physics theories which all started with a physics class with his favorite high school physics teacher. His teacher cared about the students and wanted them to be able to think independently after having learned the essential concepts. After being taught by a teacher who valued learning over grade points, Paul was introduced to a physics world that was full of creativity and innovative thinking.

Thinking Outside of the Box
Even though Paul is an engineer, he chose to become an engineer with a physics background instead of pursuing the typical engineering major. He chose physics because it was broader and covered more concepts so that he could have the knowledge to think beyond the typical solutions and come up with more innovative solutions.

Being able to think differently and more abstractly is a highly-valued skill in today’s world because of the high demand for advanced and environmentally-clean technology.