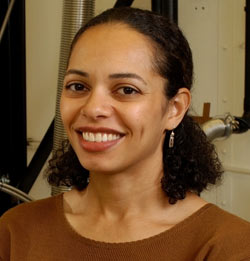 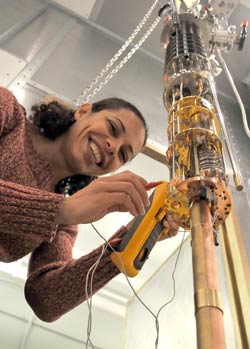 Physics Offers Versatility and Independence
Nadya Mason says that the best thing about having a degree in physics is that she gets to work in a fun and stimulating profession. She also gets to choose her schedule, focus on research and teaching that appeal to her, and travel and meet interesting people from around the world.

Having Fun With Research
Nadya teaches at the University of Illinois at Urbana-Champaign where she has moved up the ranks and is now a full professor. Her work focuses on the way electrons behave and interact in “low dimensional” materials such as carbon nanotubes and graphene. These materials are made up of extremely thin layers of carbon, sometimes no thicker than a single carbon atom. This means that a stack of 7 million sheets would be only a millimeter thick! When dimensions are so low, electrons interact in ways that create new phenomena, which Nadya aims to explore.

Her work deals with electrical resistance, which is a measure of how strongly a material opposes the flow of electric current. Resistance depends on a wire’s length and thickness, and also on the make-up of the wire’s material. This last factor that affects resistance is related to the electrons that bounce around inside the material making up the wire, Nadya says.

“Now imagine that you have a purely one-dimensional wire—such as a carbon nanotube—so that electrons can’t ‘bounce’ in all directions, they can only move back and forth. In this case, the electrons interact very strongly, like many trains running on one track might,” she explains. These strongly-interacting electrons have unusual resistance properties and form an entirely different state from electrons in regular wires.

Nadya is trying to better understand and come up with new applications for these novel electronic states. She’s excited about the innovative potential her work has: “The research that I do explores the fundamental science that may form the basis of the next generation of technology,” she says.  For example, carbon nanotubes might play an important role in the next generation of nano-scale computers. Developing a better understanding of resistance is relevant to potential applications from wires with low power dissipation to super-powerful quantum computers that could be significantly faster than the computers we use today.

Enjoy Your Work
Nadya’s main strategy for success is to make sure that she enjoys the work that she does. Most physics-related jobs involve research and problem-solving, so they’re likely to be interesting and even fun, she says. She admits that she works hard in order to balance research, teaching, and having a family but she says, “I like working hard when I’m interested in what I do!”

Stay Organized
Since she needs to be very organized in order to balance all of her commitments, Nadya plans out things that need to be done daily and on a long-term basis. She also evaluates her priorities regularly: “This helps deal with stress and worry—I know that I’m working because I like the science and because I have a great job. If small problems occur, I don’t let them derail me,” she says.

Hard Work is Worth It
“I even get paid pretty well to do all this!” Nadya notes that physics ranks as one of the highest-paid majors. “Thus, the hard work you do now in getting the physics degree will pay off for many years to come,” she says.

Graphene
Graphene is a sheet of carbon atoms that’s only one atom thick, usually found in hexagonal structures. The Nobel Prize in Physics (2010) was awarded to two scientists for their recent work on graphene.

Quantum Computer
A quantum computer is a computer that harnesses the power of atoms and molecules in order to perform calculations and memory/processing tasks. Research into quantum computers is in the early stages, but essentially they have the potential to be much faster than silicon-based computers.