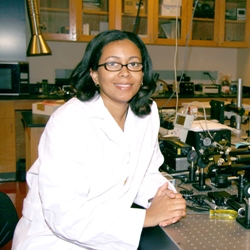 Enjoyed the Analysis of Math and Science
Marta grew up in a suburb outside of Washington, DC. She remembers being interested in math and science as early as fifth grade.

“I liked the idea that there was a process to learn and problems to solve in math and science, and I remember thinking of other topics, like history, as dates and things to memorize,” says Marta.

Early Beginnings: Astronomy and Earth Science
Marta especially liked astronomy. By the time she was 11, she had asked her parents for and received a telescope.

She first realized she was interested in physics when she took a physical sciences class in eighth grade. Marta loved studying rocks, volcanoes and magnetic forces. She was also inspired by her teacher who was an African–American woman like herself.

Chemistry and Biology Were Out
Marta knew she wanted a career in science or math. With her parents’ encouragement, she applied and was accepted to a high school with a special science and math program.

While there, she took a number of different science classes, but she found that she didn’t like biology because of the dissection requirement, and since she had a fear of chemicals, chemistry was out. “So physics was the one for me,” she said.

Teaching Physics to a Broad Audience
Marta teaches undergraduate students of all levels and backgrounds, from humanities students to physics majors, at Spelman College. “I enjoy interacting with my students most, but I also love having to continually learn new things,” she says. Marta gets ample opportunities to learn new things while she works on her latest research projects.

Playing With Optics
The focus of her research has shifted from knee cartilage to light-emitting materials. Now, Marta’s main project deals with synthesizing molecules that can give off light when they’re hit with light or when voltage is applied. She’s interested in electroluminescence properties and improving them, she says.

Marta's lab is experimenting with adding metals to the molecule of interest, in hopes that this will improve the electroluminescence of the molecule. Her work has applications in light-emitting devices, diodes for displays, and even flexible light-emitting materials.

Hard Work Makes You Look Smart
Having a career in physics requires hard work and dedication. “I always seemed to study more and have less time for socializing than my roommates,” Marta says. But there is a payoff for all this hard work: “People assume you are smart!” she says. A background in physics prepares you to solve problems and think critically, skills that open up different areas of research and employment.

Look for Opportunities
Marta tells students to study hard in science and math courses. “Take whatever opportunities you have to learn new things,” she says. You might stumble across something that interests you for life and turns into a rewarding and challenging career.

Seek Out Mentors and Physics Peers
It’s important to realize that you never have to study physics—or anything else—alone. “Seek out mentors of any background as long as they’re supportive,” Marta says. Fellow students are another great resource if you’re struggling with something. “Look to your peers and work together,” she suggests.

Hang In There!
Even if studying physics is hard at times, don’t give up! “You can accomplish whatever you want to accomplish, so don't listen to any negativity and work hard,” Marta says.

Voltage
the force or pressure of electricity. It’s a measure of energy per unit charge.

Electroluminescence
is what happens when materials give off light when an electric current or electric field is passed through it. Electroluminescent materials are commonly used in nightlights and in backlighting for liquid crystal displays. Since they don’t need a lot of electrical power, they’re useful for lighting up things like pagers and wristwatches as well.

Diode
a device that allows electric current to flow in only one direction. Diodes are used to make radio signals audible and are also found in TVs, answering machines, computers, and other electronic devices.