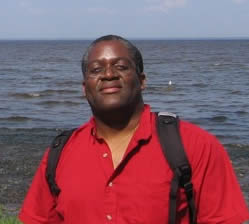 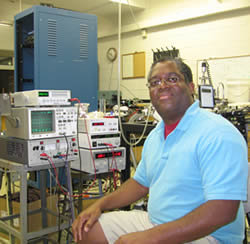 Fascinating 'Big Questions'
It’s no surprise that Edward really loves what he does. Along with the perks of periodic travel abroad, his work deals with some of the biggest questions in physics, including star and planet formation.

As a professor, Edward enjoys presenting his students with these big questions so they can see that physics is pretty fascinating. When students take a tour of Edward’s lab, he tells them that all the technology around them—phones, computers, ipods— is based on fundamental ideas in physics. “The rules of physics, although we might not understand all of them yet, are the same rules that govern how stars work and planets form. Physics describes everything,” Edward says.

Optics and Lasers
Edward continues to teach and conduct research in physics at Auburn University. These days, he’s using optical methods like lasers and spectroscopy to measure plasma, which is a new kind of research that he’s learning a lot about.

Edward and his research team are working on two new projects. In one, he’s doing lab simulations of electromagnetic waves in space. This project focuses on the earth-space environment a few hundred kilometers above the earth where satellites are constantly exposed to plasma. Electromagnetic waves can interact with the charged particles in plasma to produce very energetic particles, which could potentially damage the sensitive electronics in orbiting spacecraft.

In the long run, Edward hopes to understand how waves and particles interact in plasma, which may lead to the development of techniques that can protect the sensitive electronics of spacecraft, including satellites. This could mean more reliable GPS or cell phone signals for you!

His second project involves a microgravity experiment on dusty plasmas on the International Space Station (ISS). The ISS is manned year-round by astronauts who actually live on the space station. In addition to taking scheduled spacewalks to help expand and repair the space station, the crew also carries out experiments and collects data for scientists on Earth, like Edward.

Edward’s project on the ISS reduces the force of gravity on plasma particles so that he can look at the plasma’s physical properties in much greater detail. One intriguing aspect of this study is to understand how small particles come together in the plasma environment to form the cores of what will become planets and stars, a big scientific question that he and scientists around the world are excited to be working on.

Edward says that this project is being led by a joint team of German and Russian scientists with participants from the U.S., Japan, and all over Europe. As a result, he gets to travel to Europe frequently to work with his collaborators. When he visits abroad for work, he likes to take the opportunity to sightsee whenever he can—whether it’s visiting St. Petersburg or hiking in Munich and Berlin.

Learn from Challenges
Edward acknowledges that physics can be hard or frustrating sometimes, but learning from the challenges of experiments and mistakes is ultimately rewarding. “The key to being a physics major is the ability to solve problems,” he says. Because of their analytical training, physicists can adapt to a wide range of fields—from research positions in universities and U.S. national laboratories to jobs in industry. In fact, in 2000, all the recipients of the Nobel Prize in physics and chemistry had at least one degree in physics.

There are many career options available for people with physics backgrounds, says Edward. In research, numerous possibilities exist: “There are many, many exciting projects out there—take the time to explore as many as you can to find one that you like!”

Laser
The word “laser” is actually an acronym for light amplification by stimulated emission of radiation. Lasers are based on the fundamental behavior of atoms, and they’re used to read CDs and DVDs.

Plasma
You’ve probably heard of solids, liquids and gases, but there’s a fourth state of matter called plasmas. Plasmas are created when energy, such as heat, is added to a gas, making its atoms begin to lose electrons and become ionized. Some plasmas give off light.

Microgravity
An environment where there is very little gravitational force on objects. It’s nearly the same thing as weightlessness.