Historic Sites initiative recognizes the birthplace of the National Society of Black Physicists and a mile-deep lab at the forefront of physics.

COLLEGE PARK, MD, September 14, 2020 — Morgan State University in Baltimore, Maryland and the Sanford Underground Research Facility in Lead, South Dakota have been designated Historic Sites by the American Physical Society (APS). Each site will receive a plaque acknowledging its exemplary contributions to physics.

In December 1972, a group of friends, colleagues, and former students gathered at Fisk University in Nashville, Tennessee to honor three prominent Black physicists: Halson Eagleson, Donald Edwards, and John Hunter. Subsequent events, which also included scientific lectures and seminars, were held at Howard University in May 1975 and Morehouse College in April 1976. 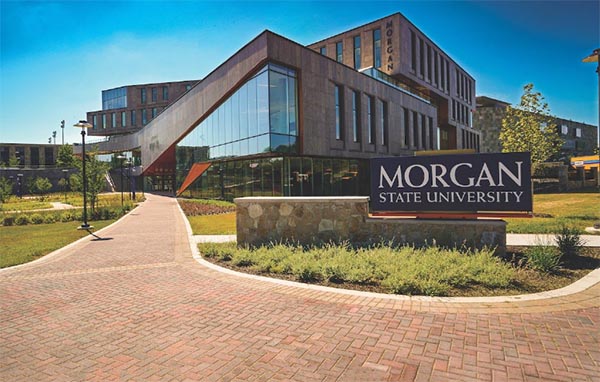 “These annual gatherings, which increasingly included both undergraduate and graduate students, grew in importance and significance, and led to the realization that a formal structure was needed to be effective in understanding, analyzing, and resolving various issues confronting African American participation in physics,” said Ronald E. Mickens, Distinguished Fuller E. Callaway Professor in the Department of Physics at Clark Atlanta University, who helped organize the events.

The organizers selected Morgan State University as the site of the following year’s event because of its large physics department and its proximity to other Historically Black Colleges and Universities and national research facilities, according to Mickens. The Society of Black Physicists was inaugurated there on April 28, 1977. The organization was later renamed the National Society of Black Physicists (NSBP) and has become the largest and most recognizable organization devoted to African-American physicists.

Caltech science historian Diana L. Kormos-Buchwald, Chair of the APS Historic Sites Committee, noted: “The work of the NSBP has been pioneering and essential, but much remains to be done by all of us and the entire scientific community to significantly raise the number of African-American participants in science, and in physics in particular.”

“As an institution rooted in the marvels of discovery and enlightenment, Morgan State University has long served as a haven for the nation’s Black scientific community—as well as a top producer of African-American graduates with degrees in STEM,” said David K. Wilson, president of Morgan State University. “We are truly honored to be designated an Historic Site by the American Physical Society. This notable distinction not only acknowledges Morgan’s early contributions to modern physics, but also our unrelenting commitment as an R2 classified doctoral research institution to cultivating tomorrow’s STEM leaders.”

On April 28, 1977, Morgan State University became the birthplace of the National Society of Black Physicists (NSBP). Its founders sought to promote the professional well-being of African American physicists within society at large and within the international scientific community. They have successfully mentored young Black students to increase their representation in physics and technology. Their persistent professional devotion to inclusion has produced the largest national organization that actively supports African American physicists.

Nearly one mile below ground, the 4850 Level of the Sanford Underground Research Facility (SURF) is home to several international experiments. The depth of the facility shields sensitive technology from cosmic rays, making it an ideal place to hunt for dark matter and study particle physics. Long before it became the United States’ deepest underground research laboratory, the Homestake Gold Mine was the site of Nobel Laureate Raymond Davis Jr.’s solar neutrino project. 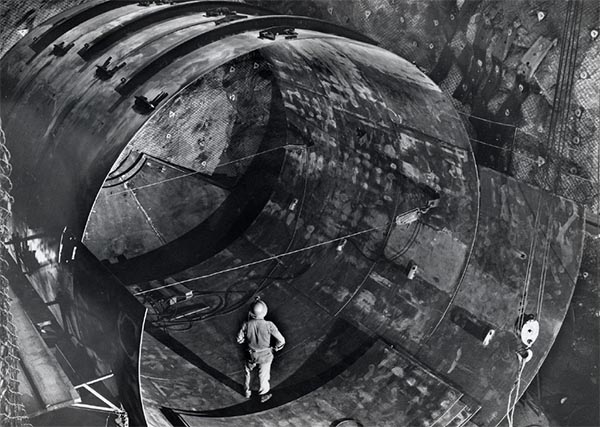 Ray Davis stands inside the nearly completed tank that would hold the detector material (100,000 gallons of dry cleaning fluid) for his Solar Neutrino Experiment. Photo courtesy of Brookhaven National Laboratory.

“The experiment was an extraordinary achievement, involving painstaking observations in a 100,000 gallon tank, deep underground, extracting and counting argon atoms,” said Kormos-Buchwald. “Davis and his collaborators demonstrated that nuclear reactions powered the Sun and provided the first evidence that electron neutrinos created in the Sun arrived at the Earth having transformed in flavor.”

“Ray Davis’ work to unlock the mysteries of neutrinos has served as an inspiration to neutrino researchers for more than five decades,” said Mike Headley, executive director of the South Dakota Science and Technology Authority, which manages SURF. “His legacy lives on in experiments around the world and in our efforts to educate the next generation of scientists and engineers. SURF is honored and proud to receive this designation from APS.”

From 1962 to 1994, Raymond Davis Jr. built and operated the first successful detector for solar neutrinos using John N. Bahcall’s theoretical model and working with William A. Fowler, Maurice Goldhaber, and numerous engineers and crew members on the 4850 Level of the Homestake Mine—now the Davis Campus at the Sanford Underground Research Facility. The result of Davis’s observations, just one third the theoretical expected flux, led to fundamental advances in particle physics and astrophysics. For his work, Davis received a share of the 2002 Nobel Prize in Physics, along with Masatoshi Koshiba for his research into the detection of cosmic neutrinos.

The Historic Sites Committee reviewed more than 25 member-nominated sites in 2020. Morgan State University and SURF were selected at a meeting of the Committee in February. Learn more about the initiative by visiting the Historic Sites page or contacting honors@aps.org.

The American Physical Society is a nonprofit membership organization working to advance and diffuse the knowledge of physics through its outstanding research journals, scientific meetings, and education, outreach, advocacy, and international activities. APS represents over 55,000 members, including physicists in academia, national laboratories, and industry in the United States and throughout the world. Society offices are located in College Park, Maryland (Headquarters), Ridge, New York, and Washington, DC