COLLEGE PARK, MD, October 6, 2020 — The Royal Swedish Academy of Sciences has awarded the 2020 Nobel Prize in Physics to Roger Penrose “for the discovery that black hole formation is a robust prediction of the general theory of relativity” and to Reinhard Genzel and Andrea Ghez “for the discovery of a supermassive compact object at the centre of our galaxy.” Ghez is the fourth woman to win a Nobel Prize in Physics. 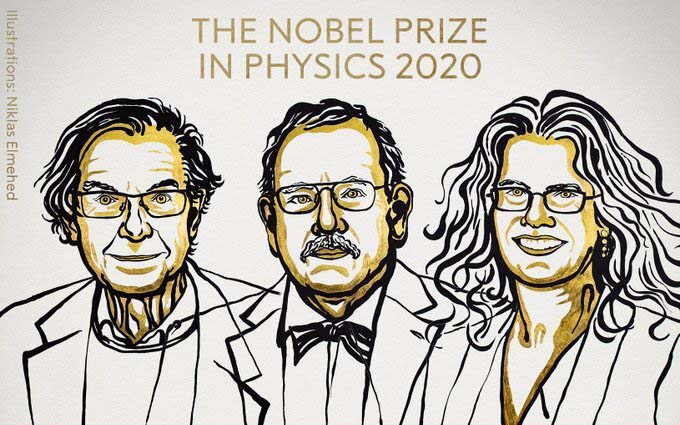 Half of the prize goes to the University of Oxford’s Penrose, whose research published in Physical Review Letters during the 1960s is considered the most important contribution to the general theory of relativity since its conception by Albert Einstein more than a century ago. In 1971, APS and the American Institute of Physics honored Penrose with the Dannie Heineman Prize for Mathematical Physics.

The other half of the prize is jointly awarded to Genzel and Ghez, both APS Fellows, who have provided some of the strongest evidence to date that the compact object at the center of the Milky Way known as Sagittarius A* is very likely a supermassive black hole. Genzel gave an invited talk at the 2020 APS April Meeting where he described the culmination of nearly 30 years of observations of the star S2, revealing that it orbits Sagittarius A* just as Einstein predicted, in the shape of a rosette rather than an ellipse. Genzel is co-director of the Max Planck Institute for Extraterrestrial Physics and professor emeritus at the University of California, Berkeley.

Glennys Farrar, chair of the APS Division of Astrophysics, said: “I’m thrilled that the Nobel Committee has recognized the critical importance of the work of Genzel and Ghez, which established beyond a doubt the existence of a supermassive black hole at the center of the Milky Way, and the work of Penrose with Stephen Hawking, predicting the existence of black holes.”

“Their work has made pioneering use of adaptive optics on the Keck telescope, and it has led to the understanding that supermassive black holes inhabit the centers of many galaxies,” said Bucksbaum.

APS recognized Ghez, a professor of astrophysics at the University of California, Los Angeles, early in her career with the 1999 Maria Goeppert Mayer Award for outstanding achievement by a woman in physics. She presented an overview of decades of research on the Galactic Center at a plenary session at the 2019 April Meeting in Denver, CO.

“As often happens in science, a conceptual breakthrough relies on developing powerful new tools, which then lead to other discoveries,” said Farrar. “The precise measurements of the Genzel and Ghez teams have not only verified aspects of General Relativity that had never before been tested, but have also led to much more accurate knowledge of the location of the Solar System in the Galaxy which will be valuable in many other applications.”

“For science to advance requires unbounded leaps of imagination, but such leaps must be subject to rigorous observational examination,” said APS President-Elect Sylvester James Gates, Jr. “So we see two dichotomies, both Illustrated in this Nobel Prize, with Penrose’s work as an example of the first while the work of Genzel and Ghez illustrate the latter.”

This is the tenth consecutive year Physical Review Letters, the flagship journal of the American Physical Society, has been cited in the scientific background materials of the physics or chemistry prizes. A recent analysis revealed that, since 1995, 28.5% of Nobel-winning research in physics appeared in Physical Review Letters, outpacing other leading publications such as The Astrophysical Journal (11.2%), Science (5.6%), and Nature (4.7%). 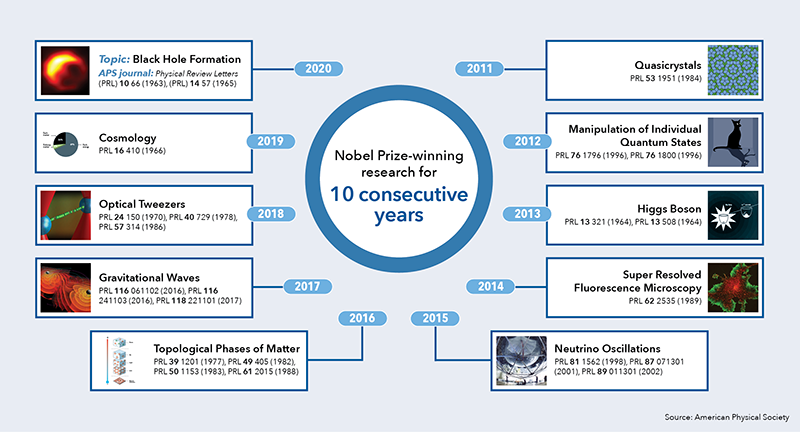 “The Physical Review journals are among the most-read and highest-cited peer-reviewed publications in physics and related disciplines, broadly trusted and valued by researchers around the world for more than 127 years,” said APS Publisher Matthew Salter.

The Nobel Prize, first awarded in 1901, is widely regarded as the highest honor in science, economics, and literature. Due to the ongoing COVID-19 pandemic, the 2020 award ceremony at Stockholm City Hall will be streamed online in December. Laureates will receive medals and diplomas in their home countries. The Nobel Foundation has increased the prize amount to 10 million Swedish krona (about 1.1 million US dollars) for the first time since 2011.

The following articles, cited in the Scientific Background on the Nobel Prize in Physics 2020, have been made free-to-read by APS:

A collection of landmark papers on general relativity, curated by the editors of the Physical Review journals, is available at https://journals.aps.org/general-relativity-centennial

The American Physical Society is a nonprofit membership organization working to advance and diffuse the knowledge of physics through its outstanding research journals, scientific meetings, and education, outreach, advocacy, and international activities. APS represents over 55,000 members, including physicists in academia, national laboratories, and industry in the United States and throughout the world. Society offices are located in College Park, Maryland (Headquarters), Ridge, New York, and Washington, DC