Three APS members received the physics prize for their groundbreaking experiments with quantum entanglement, the phenomenon sometimes known as “spooky action at a distance.”

“The American Physical Society congratulates the 2022 Nobel Laureates for their outstanding contributions to the development of quantum science,” said Jonathan Bagger, CEO of APS. 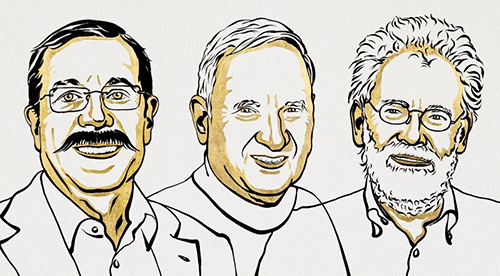 “This prize reflects the importance of the awardees’ experiments to our fundamental understanding of quantum mechanics as well as to emerging technologies such as quantum computers and quantum communication,” said Frances Hellman, President of APS. “The work is a great example of the best of physics — exploring the truth and beauty of the universe while also laying the foundation for technologies that improve life on Earth.”

The Nobel Committee for Physics has split the prize equally among the three Laureates: Aspect of the Université Paris-Saclay and École Polytechnique in France, Clauser of J.F. Clauser & Associates in the United States and Zeilinger of the University of Vienna. Each Laureate has conducted experiments that examined entangled states of particles, contributing essential evidence for the theory of quantum mechanics and laying the groundwork for quantum information science technologies.

“It is truly great for the quantum information community to see this year’s Nobel Prize in Physics be awarded for these early experiments, which established the properties of quantum physics,” said Jerry Chow, chair-elect of the APS Division of Quantum Information and director of quantum infrastructure at IBM Quantum. “Our rapidly growing Division of Quantum Information with worldwide representation across academia and industry is a testament to the impact of that early work.”

One of the key phenomena underlying quantum mechanics is entanglement, when two or more particles are part of a shared destiny — what happens to one particle determines the fate of the other and vice versa. Albert Einstein famously referred to this phenomenon as “spooky action at a distance,” because entanglement ties the states of particles together even when separated by great distances.

“The work of Aspect, Clauser and Zeilinger provides the practical theoretical methods and conclusive experimental measurements that underline the distinction between the quantum and classical worlds, showing that quantum objects can be related through entanglement in a way that is not possible with classical objects,” said Andew Cleland, chair of the APS Division of Quantum Information and a professor of molecular engineering at the University of Chicago.

“These experiments give evidence of the most striking aspects of quantum physics,” said Stephen Bartlett, lead editor of the APS journal PRX Quantum and theoretical quantum physicist at the University of Sydney. “Perhaps equally as striking is that these experiments have also laid the foundations for a new generation of technologies such as quantum computing and secure communication.”

In light of these advances, APS is leading an effort to have the United Nations designate 2025 as the International Year of Quantum Science and Technology. The year-long initiative would celebrate the profound impacts of quantum mechanics on science, technology and culture.

This marks the twelfth consecutive year that the Nobel Committee has cited papers in APS’ Physical Review journals in the scientific background materials of the physics or chemistry prizes.

The Nobel Prize, first awarded in 1901, is often regarded as the highest honor in science, economics and literature. The prize amount of 10 million Swedish kronor (a little less than 1 million U.S. dollars) will be shared equally among the three recipients.