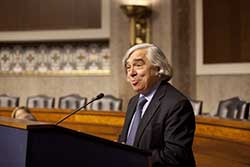 The Department of Energy’s 17 national laboratories are the source of numerous scientific breakthroughs, world-renowned experimental facilities and employers of Nobel Laureates. But, when it comes to understanding how these labs contribute to science, security and innovation, many members of Congress and their staff remain in the dark.

To shed some light on what the labs do, Energy Secretary Ernie Moniz fielded a “National Labs” day on Capitol Hill to showcase the exemplary work done at these facilities.

And it seemed to be a success.

The event, which occurred on Sept. 16 in the Senate, included lab exhibits, as well as a brief panel discussion moderated by Moniz. Others in attendance included National Cancer Institute director Harold Varmus; former White House Science Adviser Neal Lane; and a number of senators, including some from the Senate Energy and Natural Resources Committee, which has authorizing jurisdiction over the labs’ budgets.

The event took place at a time when many are examining how to make the lab system more efficient and while others in Congress are proposing to cut lab budgets as part of a broader effort to address the national debt. However, as Norman Augustine, former CEO of Lockheed Martin underscored, the labs conduct research that the private sector does not, given the long gestation period until breakthroughs can arise. Simply put, if the federal government does not provide funding for fundamental research, no one will.

To help spread the word about the labs, Sens. Jim Risch (R-ID) and Richard Durbin (D-IL), both of whom have labs in their states, announced the formation of a Senate National Laboratory Caucus, a counterpart to one established in the House more than a year ago.

However, the DOE Lab display, although credited to Secretary Moniz, is hardly the first of its kind. An organization formed by the National User Facility Organization (NUFO) has conducted four such exhibitions on the Hill for members and staff, the most recent one occurred in June of this year. NUFO continues to work with members of Congress and staff to help them develop a deeper appreciation for the role the national laboratory’s research facilities play in developing new technologies, pharmaceuticals, national security technologies and other breakthroughs that help fuel the American innovation ecosystem.