Innovation in Action: The JWST 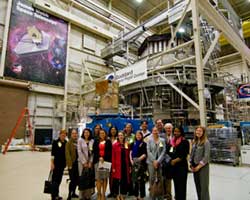 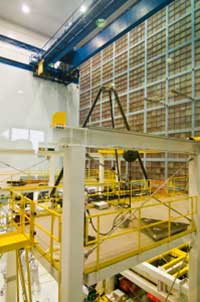 APS and a coalition of science policy advocates recently took a trip to NASA Goddard to examine the progress of the construction of the James Webb Space Telescope (JWST) as well as other federally funded activities at the site.

As most people are aware, the JWST is intended to be the successor to the Hubble telescope; it is slated to launch in late 2018 and will embark on a five-year mission to find the first stars and trace the evolution of galaxies from their beginning to their current formation. It is, according to the 2001 decadal survey of the National Research Council, the top-priority new initiative for astronomy and physics — a telescope that will operate at 100 times the sensitivity of the Hubble Space Telescope.

The visit to the JWST was meaningful on a number of levels, not the least of which was to allow science policy advocates to see the fruits of their labors. OPA, along with our counterparts in organizations such as the American Institute for Physics, the American Astronomical Society and others in the science advocacy community, have worked hard to ensure that the JWST project continues to receive funding for a successful completion.

Our efforts were particularly important after a several members of Congress expressed concern about the project’s management, leading House Appropriations Committee Commerce, Justice, Science Appropriations Subcommittee Chair Frank Wolf (R-Va.) to zero out its funding in 2011. OPA and others pressed Wolf on the importance of funding JWST, and along with needed management changes, that’s exactly what happened.

The telescope, more importantly, is a marvel of modern engineering and innovation. In fact, engineers and scientists at NASA had to invent a lot of the technology used in the JWST because it simply didn’t exist. Four patents have been issued as a result of the innovations driven by JWST construction.

For example, NASA created the Scanning Shack-Hartmann Sensor to accurately measure the shape of Webb’s mirrors during manufacturing; however, the sensor is now being used for measurement of human eyes and diagnosis of ocular diseases. It may even lead to improved surgery, allowing eye doctors to obtain detailed information about the shape of a patient’s eye in seconds rather than hours.

Another innovation prompted by the JWST was high-speed optical sensors. The project’s engineers needed to find a way to test mirrors and composite structures at extremely cold temperatures, the same at which they will operate in space. But, according to NASA, “with desired precisions of nanometers, vibration is a constant problem.” This led a Tucson, Ariz., company to develop several new types of high-speed test devices that utilize pulsed lasers that negate the effects of vibration. Not only did 4D technology help solve an important technical challenge for JWST, but its innovation created jobs and nearly $30 million in revenue from a vast array of applications within the astronomy, aerospace, semiconductor and medical industries. And to those who claim that private industry could have created these innovations less expensively, one can easily counter that “necessity is the mother of invention.” Had JWST not needed these technologies, private industry likely would not have had the impetus to invent them. In addition, their experimental nature would likely have been deemed too risky to ensure a payoff for stockholders.