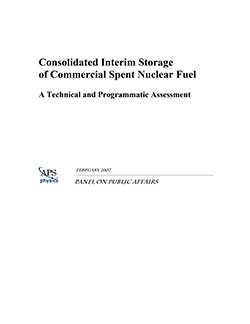 Approximately 54,000 tons of spent nuclear fuel are stored at operating nuclear power plants and several decommissioned power plants throughout the country. Spent fuel storage at these sites was never intended to be permanent. The current Federal plan is to place the fuel in a repository for permanent disposal in Nevada at Yucca Mountain.

Recently, appropriations committees in Congress suggested building one or more Federal sites for consolidated interim storage of spent fuel. Several reasons were identified. The schedule for opening Yucca Mountain continues to slip. Further, the Federal government faces substantial and growing liability costs the longer the spent fuel stays at reactor sites. Finally, there is a concern that the buildup of spent fuel at reactor sites and lack of progress on final disposition could be serious constraints on the growth of the domestic nuclear power industry by discouraging investment in new nuclear power plants and enhancing the difficulty of siting new nuclear power plants.

We focus on the issues associated with proposals to establish one or more sites for the consolidated storage of spent nuclear power reactor fuel as an interim measure before final disposition. In reviewing numerous reports and research articles, we find that:

Such a decoupling could arguably also be accomplished if the Federal government took title to the spent fuel at the reactor sites.

A permanent repository is the cornerstone of the nation’s waste management strategy. Consequently, if the Federal government were to proceed with interim storage, it should be done in a manner consistent with Federal strategies for long-term management. Further, any development of consolidated interim storage must be sensitive to the significant hurdles to siting which would make it difficult to open a consolidated storage site in less than a decade. If Congress chooses to direct the development of consolidated storage facilities, the exploration of strategies to improve their economic and social attractiveness to potential host communities should receive careful consideration.