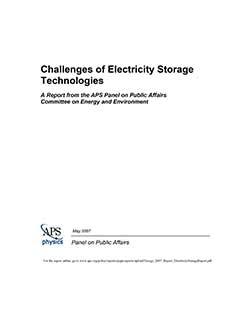 The APS Panel on Public Affairs explored the various components of a balanced program in a workshop with representatives from the national labs and the utility sector,along with an economist and university scientists. The Panel concluded that the six primary electricity storage technologies are at varying stages of maturity and that achieving the potential economic and environmental benefits of electricity storage will require a comprehensive and balanced strategy. Basic research, demonstration projects, incentives and regulation are all necessary elements that can be used to advance energy storage technologies. In fact, demonstration projects and regulatory incentives may have as much impact on technological penetration of electricity storage at this stage as basic research to bring down cost and raise efficiency.

Each of the program elements are detailed in the report.

Given the potential environmental and economic benefits of electricity storage technologies, DOE should consider broadening the existing program. For a broader program to be successful, it must achieve a balance among basic research, demonstration projects, and regulatory incentives. To strike the appropriate balance among the various program elements, DOE should evaluate any larger initiative with significant input from the utility sector, state and regional utility regulators, and principal investigators from universities, national laboratories and industry. Regarding regulatory incentives in particular, since they can have a large impact on advancing electricity storage, DOE should convene a separate panel of experts to study regulatory, ownership and pricing policies that impact electricity storage.

In addition, DOE should include in these discussions representatives from other federal agencies whose portfolios include research that is needed for electricity storage technologies. The APS Panel determined that there would be substantial overlap with the interests of the Department of Defense, NASA and the National Science Foundation.

Founded in 1899 to advance and diffuse the knowledge of physics, the American Physical Society is now the nation’s leading organization of physicists with approximately 50,000 members in academia, national laboratories, and industry. APS has long played an active role in the federal government; its members serve in Congress and have held positions such as Science Advisor to the President of the United States, Director of the CIA, Director of the National Science Foundation and Secretary of Energy.

This report was overseen by the APS Panel on Public Affairs (POPA). POPA routinely produces reports on timely topics being debated in government so as to inform the debate with the perspectives of physicists working in the relevant issue areas.