Liquid helium is the professional lifeblood of tens of thousands of scientists and engineers across America's discovery and innovation landscape, including universities, industries, and national laboratories. It has enabled the development of billion-dollar industries, fueled essential life-saving medical diagnostic tools, led to thousands of patents, generated numerous Nobel prizes — and it remains essential to future innovation.

There is no replacement for liquid helium. Helium is unique among all elements for its ability to reach ultra-cold temperatures. Its essential role in the U.S. scientific enterprise has been documented in multiple reports and statements by many esteemed scientific organizations, including the American Physical Society, Materials Research Society, American Chemical Society, and the National Academy of Sciences.

The quantity of liquid helium used in scientific research is only a small fraction of the total helium market. As a result of this relative small market usage, the scientific community has little, if any, purchasing power in the helium market, and researchers suffer from unpredictability and instability in both supply and price. During the last five years, some researchers have seen prices increase by more than 250%, and the supply has been severely limited and uncertain.

If nothing is done to address these price and supply issues, then there will be a lasting negative effect on the scientific enterprise in the U.S. In fact, as helium has become less available and much more expensive, we have already begun to see damaging signs:

This report lays out the issues facing researchers who use liquid helium and the negative impact on U.S. innovation. The report then proposes five key steps that will have a transformative effect on the ability to maintain the ready availability of helium and ensure the vibrancy of the U.S. low-temperature research capability. These recommendations focus on: conservation of helium use; a mechanism to pay for the capital investment required for helium recycling; a mechanism to ensure an appropriate price is paid by researchers for helium; and a methodology which allows researchers to best explore the options available to them.

The comprehensive and achievable recommendations covering the Executive Branch, Congress, and scientific societies are as follows: 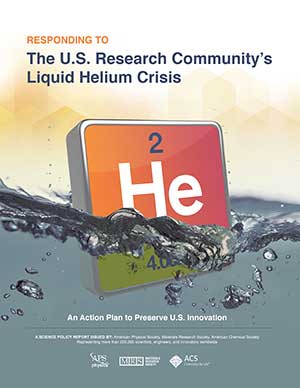