Integrating Renewable Electricity on the Grid 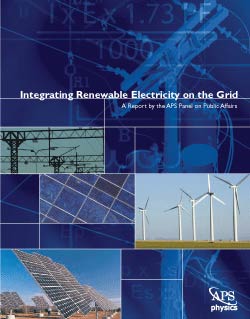 The United States has ample renewable energy resources. Land-based wind, the most readily available for development, totals more than 8000 GW of potential capacity. The capacity of concentrating solar power is nearly 7,000 GW in seven southwestern states. The generation potential of photovoltaics is limited only by the land area devoted to it, 100–250 GW/100 km2 in the United States. To illustrate energy capacity vs. projected demand, the US generated electric power at an average rate of approximately 450 GW in 2009, with peaks over 1000 GW during the summer months. By 2035, electricity demand is projected to rise 30%.

To date, 30 states, plus the District of Columbia have established Renewable Portfolio Standards (RPS) to require that a minimum share of electrical generation is produced by renewable sources. In addition to state policies, federal policymakers have put forward proposals to establish a national RPS, making the need for technological developments more urgent.

The variability of renewable resources, due to characteristic weather fluctuations, introduces uncertainty in generation output on the scale of seconds, hours and days. These uncertainties, affect up to 70% of daytime solar capacity due to passing clouds and 100% of wind capacity on calm days for individual generation assets. Although aggregation over large areas mitigates the variability of individual assets, there remain uncertainties in renewable generation that are greater than the relatively predictable uncertainties of a few percent in demand that the grid deals with regularly.

Greater uncertainty and variability can be dealt with by switching in fast-acting conventional reserves as needed on the basis of weather forecasts on a minute-by-minute and hourly basis; by installing large scale storage on the grid or; by long distance transmission of renewable electricity enabling access to larger pools of resources in order to balance regional and local excesses or deficits. At present, renewable variability is handled almost exclusively by ramping conventional reserves up or down on the basis of forecasts. However, as renewable penetration grows, storage and transmission will likely become more cost effective and necessary.