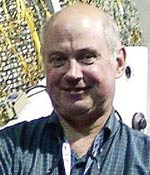 
Born in Victoria BC Stewart Smith received BA and MSc degrees from the University of British Columbia (1959/1961), and his PhD from Princeton University in 1966. With a fellowship from Stiftung Volkswagenwerk he worked at the Deutsches Elektronen-Synchrotron (DESY) on experiments testing QED and measuring couplings of photons to vector mesons. He then joined the Princeton faculty, chairing the Physics Department from 1990 to 1998, and serving as Princeton's first Dean for Research since 2006.  Smith has carried out experiments on K-decays at Brookhaven; lepton-pair production and hadron structure functions at Fermilab. The BaBar experiment at SLAC has been his main interest since 1995.  As Technical Coordinator (1999) and Spokesperson (2000-02), Smith had central roles in BaBar's 2001 discovery of CP-violating asymmetries in the B-meson system, which finally explained experimentally the CP violation discovered in 1964 in K decay, and with subsequent results from BaBar and the Belle experiment in Japan conclusively confirmed the CKM picture of quark mixing and CP violation.  An APS fellow, he chaired the Division of Particles and Fields in 1991, and has served on advisory committees for the DOE, US National Laboratories, CERN, and SNOLAB. He received a DSc degree from the University of Victoria in 2009.