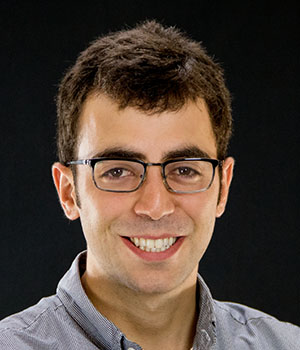 Adam M. Kaufman
JILA, University of Colorado Boulder and the National Institute of Standards and Technologo


"For seminal developments in optical tweezer arrays and clocks based on alkaline earth atoms, with applications to metrology and quantum information processing."


Adam Kaufman received his BA from Amherst College in 2009, with a double major in Physics and Computer Science. In 2015, he received his Ph.D. from the University of Colorado Boulder, at JILA, working under the mentorship of Cindy Regal. His thesis work focused on developing tools to cool and control single atoms in mobile optical tweezers, resulting in an observation of atomic Hong-Ou-Mandel interference and a two-qubit gate through spin-exchange. He moved to Harvard for his postdoctoral work under Markus Greiner, where he and the team performed experiments on the role of entanglement in thermalization, as well as studies of interacting few-body systems in the presence of an artificial magnetic field. In July 2017, he returned to Boulder, where he is now a JILA fellow, with appointments as an Associate Professor Adjoint of the University of Colorado Boulder and NIST physicist. His group focuses on trapping alkaline-earth(-like) atoms in optical tweezers, to exploit their internal degrees-of-freedom for new paths in quantum information, quantum metrology, and quantum simulation; they also explore the development and incorporation of new technologies, like cryogenics, to advance control of single atoms. Kaufman’s awards include the New Horizons in Physics prize, the ONR Young Investigator award, and the DAMOP thesis prize.