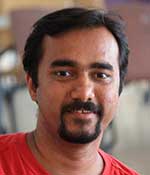 
"for contribution to the search and discovery of the Higgs boson and for his exemplary dissertation, entitled "Discovery of a Higgs boson in the H to ZZ to 4L Channel," covering Higgs physics, the details of his Higgs studies and other contributions to the CMS experiment."


Adish Vartak pursued his undergraduate studies in physics and received his masters degree in 2008 at the Indian Institute of Technology Kanpur, India. He then started his doctoral research at the University of California San Diego, working on the CMS experiment at the LHC under the supervision of Prof. Vivek Sharma. In 2010-11, he studied the Higgs boson decay final state H->ZZ->2l2v which helped to significantly enhance the sensitivity of the Higgs search in the high mass range beyond 200 GeV. In 2012-13, he worked on the H->ZZ->4l search which played a key role in the discovery of the Higgs boson. Adish got his doctorate degree in 2014. He is currently pursuing search for dark matter at the CMS experiment.