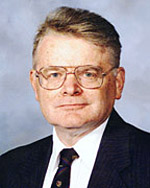 
"In recognition of his distinguished career in gaseous electronics, marked by a sustained creativity in linking fundamental processes to the macroscopic properties of gas discharges and plasmas, and for his dedicated role as an advocate for the field of gaseous electronics."


In 1958 Dr. Garscadden received his BSc (Honors) in Physics and in 1962 his Ph.D. in Physics at Queens University, Belfast.