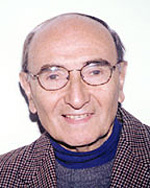 
"For their pioneering work on radiative corrections, which made precision electroweak studies a powerful method of probing the Standard Model and searching for new physics."

During 1948-52 he studied at the University of Buenos Aires, and in 1953 received the degree of Dr. in Physical-Mathematical Sciences. In 1953 he was a fellow at the Centro Brasileiro de Pesquisas Fisicas in Rio de Janeiro, Brazil, where he attended some graduate courses, including a memorable one with Richard Feynman, and did research work.

His main research interests have been in precision electroweak physics, other topics in weak interaction theory, the search for higher symmetries of the strong interactions, non-topological solitons, theorems on symmetry-breaking, some aspects of QCD, and the theoretical treatment of unstable particles.

He is a fellow of the American Physical Society. In 1983 he was awarded a Guggenheim fellowship and, in 1997, received the Alexander von Humboldt Award.