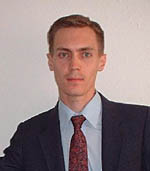 
Alexey Arefiev received his B.S. in physics (with Highest Honors) from Novosibirsk State University (Russia) in 1998. As an undergraduate student, he worked at the Budker Institute of Nuclear Physics (Novosibirsk, Russia). His undergraduate research was focused on the physics of single species plasma. In 1999, Alexey enrolled in the graduate program in Plasma Physics at the University of Texas at Austin. His graduate work was supported by the Variable Specific Impulse Magnetoplasma Rocket (VASIMR) project (NASA Johnson Space Center), Institute for Fusion Studies, and Fusion Research Center. Alexey received his Ph.D. in physics from the University of Texas at Austin in 2002. His thesis advisors were Dr. Boris Breizman and Prof. Roger Bengtson.

Alexey is currently employed by the Institute for Fusion Studies as a Postdoctoral Fellow. He provides theoretical support for the VASIMR team, working on issues of ion heating and plasma production. Alexey has also joined the High Intensity Laser Science Group at the University of Texas at Austin, to collaborate on theory involving laser-irradiated micro-clusters. Alexey's areas of interest include: helicon plasma sources, ion cyclotron heating, and laser-target interaction.