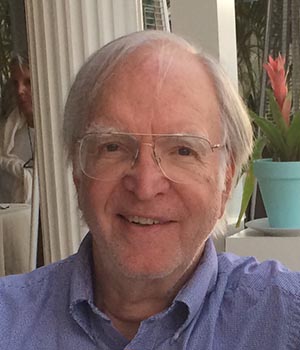 
"For pioneering contributions to the development and application of Lie methods in accelerator physics and nonlinear dynamics."


Alex J. Dragt received his A.B. in chemistry and mathematics from Calvin University in 1958, and earned his Ph.D. in theoretical physics in January 1964 at the University of California, Berkeley, under Robert Karplus. His early work includes classification of quantum-mechanical three-body states using the group SU(3); the construction of normal-form Hamiltonians for mirror machines using Lie-algebraic methods; and demonstration that the Stoermer problem (the motion of a charged particle in a dipole magnetic field, an idealization of the Van Allen radiation) is not integrable, indeed the motion is chaotic. Subsequent work was devoted to the convergence properties (in several complex variables) of Wigner-function expansions with applications to the analytic properties of scattering amplitudes in particle physics, including spin. Much of his later work, and that of his University of Maryland graduate student and post-doctoral research group in Dynamical Systems and Accelerator Theory, is devoted to the development and application of Lie-algebraic methods to accelerator physics, electron microscopes, and geometric light optics. (They are grateful to the U.S. Department of Energy Office of Science and the University of Maryland and the other Institutes and Laboratories listed later for their support of this effort.) This work is based on the realization that dynamical systems described by Hamiltonians, as already partially understood by Hamilton and Jacobi when they developed Generating Functions, have very special properties. In particular, the relation between initial and final conditions obtained by integration of Hamilton’s equations of motion is what is now called a symplectic map. Symplectic maps form a particular infinite-dimensional Lie group of linear and nonlinear transformations/mappings of phase space into itself. Based in part on Lie-algebraic tools developed initially by researchers in Celestial Mechanics, the Maryland group has done extensive work on representing, computing, manipulating, analyzing, and applying symplectic maps. For example the effect of each beam-line element in an accelerator (including all drift spaces, bending dipole and focusing/defocusing quadrupole and higher-order multipole magnets, and accelerating rf cavities) is treated as a symplectic map computed and represented by Lie-algebraic methods. These maps are then multiplied/combined using very general Lie-algebraic results to find the net map for the full accelerator including all linear and all nonlinear (up to some high order) effects. Subsequently the net map can be analyzed by normal-form methods (a nonlinear generalization of matrix diagonalization) to determine expected accelerator performance. In the case of a circular machine such as the Large Hadron Collider, long-term orbit stability can be studied by repeated application of the net one-turn map. This general map-based approach to Accelerator Physics was recognized by a 2013 IEEE Particle Accelerator Science and Technology (PAST) award. Alex Dragt has had visiting memberships at the Institute for Advanced Study, Princeton; the Institut des Hautes Etudes Scientifiques, Bures-sur-Yvette, France; and the Institute for Theoretical Physics, University of California, Santa Barbara. He has also had visiting appointments at the Los Alamos National Laboratory, the SSC Design Center at the Lawrence Berkeley Laboratory, and the Stanford Linear Accelerator Center. In 2002 he served as Chair of the APS Division of Physics of Beams Executive Committee. During 1985-1993 he also served as one of the Editors of Physica D: Nonlinear Phenomena. He is a Fellow of the APS and the AAAS; and is a member of the IEEE, the American Geophysical Union, and the American Mathematical Society.