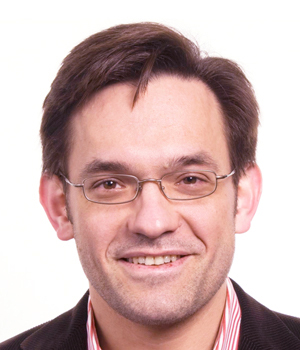 
"For innovative experiments that demonstrate turbulent dynamo in the laboratory, establishing laboratory experiments as a component in the study of turbulent magnetized plasmas, and opening a new path to laboratory investigations of other astrophysical processes."


Alex Schekochihin studied at the Moscow "Phystech" (BSc in Applied Mathematics and Physics 1995) and at Princeton (Ph.D. in Astrophysical Sciences 2001). After postdoctoral stints at UCLA, Imperial College, and Cambridge, he returned to Imperial as a faculty member in 2006. In 2008, he moved to Oxford, where he is now Professor of Theoretical Physics and Fellow of Merton College. He is a Fellow of the APS and has held Visiting Professorships at the Isaac Newton Institute (Cambridge), Université Pierre et Marie Curie (Paris VI), and the Niels Bohr International Academy (Copenhagen). In 2019, he was awarded (by the Institute of Physics) the Cecilia Payne–Gaposchkin Medal for distinguished contributions to plasma, solar or space physics. Originally starting at Princeton with an interest in fusion plasmas, he focused on turbulent dynamo for his PhD, a topic he has never managed to let go completely, although he did later branch out to work on plasmoid reconnection, MHD turbulence, stochastic advection, astrophysical gyrokinetics, instabilities and turbulence in the solar wind, in tokamak plasmas and in galaxy clusters. Initially determined to be an ivory-tower theoretician, he now fraternizes with observers and experimentalists, both real and numerical (but they still think he is an ivory-tower theoretician). He has supervised or co-supervised 18 doctoral students and nine postdocs. His current preoccupations fall within the broad theme of turbulence in weakly collisional plasmas (phase-space cascades, heating, pressure-anisotropic dynamics, dynamo) and focus particularly on turbulent transport in tokamaks, the solar wind and the (thermo)dynamics of galaxy clusters, as well as the origin of cosmic magnetic fields --- a topic that at Oxford led to a continuing close collaboration with Gianluca Gregori's experimental group in laser plasmas. Their attempts to produce a turbulent plasma dynamo in the laboratory proved successful and have led to the 2019 Dawson Award.