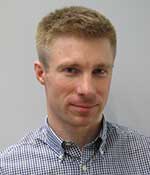 
Alexander Steppke studied physics at the University of Jena, Germany, graduating in 2007 with a thesis on superconducting quantum interference devices based on thin films of high-temperature superconductors. For his Ph.D., he worked on quantum phase transitions at the Max Planck Institute for Chemical Physics of Solids in Dresden, Germany under the supervision of Professor Frank Steglich. During this time he showed that the heavy-fermion compound YbNi4P2 can be tuned to a ferromagnetic quantum critical point, an experimental observation which was previously called into question from a theoretical perspective, unless certain special circumstances were fulfilled. After graduating with a Ph.D. in physics from the Technical University of Dresden in 2014, he worked on the unconventional superconductor Sr2RuO4 at St Andrews University, Scotland under Professor Andrew Mackenzie. He is currently investigating the question of the superconducting order parameter in this material using a uniaxial strain technique. Alexander is interested in the experimental study of the physics of strongly correlated electron systems, especially at low temperatures, to reveal their unique properties. He has also received the Otto Hahn medal of the Max Planck Society.