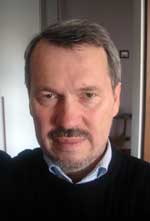 
"For pioneering and influential work on the enhancement of neutrino oscillations in matter, which is essential to a quantitative understanding of the solar neutrino flux."


Alexei Smirnov graduated from Moscow State University in 1974. In 1977 he began working at the Institute for Nuclear Research (INR) of the Academy of Sciences of the USSR where he received his Ph.D. in 1979. In 1989 he received a degree of Doctor of Physical and Mathematical sciences. He also taught at the physics department of Moscow University from 1982 to 1990.

Smirnov joined the International Centre for Theoretical Physics, ICTP (Trieste, Italy) in 1992 as a staff-associate while continuing his affiliation with INR (Moscow) as a leading research scientist. He became a staff member with ICTP in 1997 and presently holds the position of principal research scientist.

The main area of Smirnov's research is neutrino physics and astrophysics. In 1984 -1985, following earlier work by Lincoln Wolfenstein, Smirnov, together with Stanislav Mikheyev, uncovered effects of resonance enhancement of neutrino oscillations in matter and the adiabatic conversion in non-uniform media (the MSW-effect). Solutions to the solar neutrino problem based on the MSW effect have been proposed. The effects were also applied to supernova neutrinos and neutrinos of various origins propagating in the Earth.

In the following years Smirnov and his colleagues developed a number of aspects of theory and phenomenology of neutrino conversion in various media. Currently Smirnov is working on implications of the obtained neutrino results for fundamental physics (quark-lepton complementarity, unification, etc.) as well as on future programs of studies in neutrino physics.

Smirnov is an editor of journals JHEP and JCAP and a divisional associate editor for Physical Review Letters. His awards and honors include the Biedenharn endowed chair in physics (University of Texas, Austin, 2002), the award of the Japanese Society for promotion of science (2004), the Alexander von Humboldt research award (2004), the Bruno Pontecorvo prize (2005), and the Schroedinger guest professorship (Vienna, 2007).