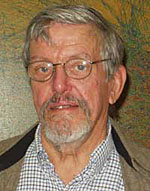 
"For his seminal contributions to the theory and technical development of nuclear magnetic resonance spectroscopy, and for pioneering applications of this technique to the study of biological molecules."


Alfred Redfield received a BA from Harvard in 1950, and a PhD from the University of Illinois in 1953, where he studied Hall effect in diamond and alkali halides. His postdoc at Harvard, with Bloembergen, resulted in his first NMR papers on spin thermodynamics in the rotating frame, and on perturbation theory of relaxation. He joined the late IBM Watson Laboratory at Columbia University in 1955 where he studied primarily normal and superconducting metals using field-cycling NMR, including extension of the seminal NMR relaxation result of Hebel and Slichter to low temperatures with A. G. Anderson and Yoshika Masuda, and the structure of the type-II fluxoid lattice. In 1969 he shifted to work on biological NMR, with Raj Gupta, starting with the first NMR observation of intra-protein electron transfer in cytochrome C. After a two year sabbatical with D. E. Koshland, he moved to the Brandeis Departments of Physics and of Biochemistry in 1972, where his early work included demonstration and utilization of pulsed FT NMR using soft and composite pulses in, especially, transfer RNA. During this time his coworker Siddhartha Roy performed an early sequential NOE walk in this 70K molecule. Later his group worked on NMR studies of the Ras protein. During his recent retirement he has demonstrated the feasibility of building a device to perform high-resolution field-cycling NMR in a shared commercial (500 MHz) instrument, and is now applying this device to a variety of problems, in collaboration with Mary Roberts. This work was initially inspired by the earlier work of S. H. Koenig and coworkers, on field-switching NMR relaxation of solvent in protein solutions. Member, NAS, 1979; ISMAR Prize 1995.