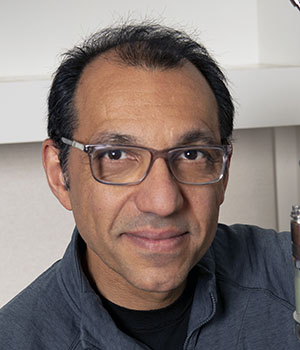 
"For innovative applications of scanning tunneling microscopy and spectroscopy to complex quantum states of matter."


Ali Yazdani is the Class of 1909 Professor of Physics at Princeton University and the director of Princeton Center for Complex Materials, an NSF-funded center for material research in science and engineering. He is known for his research in advancing our understanding of emergent quantum phenomena by application and development of high-resolution microscopy techniques to directly visualize highly entangled quantum states of matter. He graduated from UC Berkeley with a degree in physics and from Stanford University in 1995 with a Ph.D. in applied physics. After working as a postdoctoral scientist at IBM, he started his own independent research group at the University of Illinois in Urbana-Champaign before joining Princeton University's Physics Department in 2005. He has held visiting professorships at Stanford and at Cambridge University (Trinity College) in UK and has been a Loeb Lecturer at Harvard. For his research accomplishments, he has been recognized by several awards and honors including a Humboldt research award and have been elected a fellow of American Physical Society, American Association for Advancement of Science, and American Academy of Arts and Sciences. In 2019, he was elected a member of the National Academy of Sciences. He has advised more 30 graduate students and postdoctoral fellows.