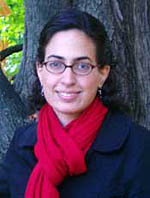 
"For her contributions to the measurement of neutrino fluxes which conclusively support the hypothesis of flavor oscillation of neutrinos produced in the sun as they travel toward the earth. The results further suggest the most likely cause of the flavor change to be matter-induced oscillation."


Alysia Marino was born in New York City and became interested in neutrino physics as an undergraduate. She received her A.B. degree in Physics from Princeton University in 1998, where she worked with Mark Chen on a thesis on muon identification in the Borexino solar neutrino detector.

She continued to pursue neutrino research in graduate school at the University of California at Berkeley, receiving her PhD in Physics in 2004. Her research on the Sudbury Neutrino Observatory (SNO), a 1-kiloton heavy-water Cerenkov detector, was performed with Kevin Lesko and his group at Lawrence Berkeley National Laboratory. The topic of her dissertation was a measurement of the solar neutrino flux in the second phase of the SNO experiment, in which 2 tons of salt were added to enhance the detection of neutral-current neutrino interactions. The results of this measurement indicated that the flux of electron neutrinos from the Sun was 7 standard deviations smaller than the flux of all neutrino flavors, providing compelling model-independent evidence for neutrino flavor changes. The total solar neutrino flux measured in the SNO detector is also consistent with the prediction of the standard solar model, resolving the 35-year-old solar neutrino problem.

Since graduating, Dr. Marino has shifted the focus of her research to accelerator-generated neutrinos. She is currently a postdoctoral researcher at Fermi National Accelerator Laboratory, working on the Minos experiment.

As an undergraduate Alysia was elected to Phi Beta Kappa and Sigma Xi, and her graduate studies were partially supported by a Department of Education Fellowship.