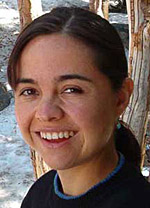 
Ana María Rey was born and raised in Bogotá, Colombia. She pursued her undergraduate studies in Bogotá at the Universidad de los Andes supported by a University Fellowship ("Beca 40 años"). She wrote her undergraduate thesis under the advice of Prof. Rafael Bautista, studying the propagation of light in the presence of a rotating black hole. She received four times the best GPA award in the physics department and graduated magna cum laude in 1999 pronouncing the commencement speech. In 2000, Ana María began her graduate studies at the University of Maryland at College Park (UMCP). In her first year of graduate studies she worked with Prof. Adil Hassam on plasma physics. In 2001 she joined the division of electron and optical physics at National Institute of Standards and Technology (NIST) and started her theoretical research in cold atoms under the advice of Dr. Charles Clark at NIST and Prof. Theodore Kirkpatrick at UMCP. Her doctoral work was on ultracold bosonic atoms loaded in optical lattices with special focus on the superfluid to Mott insulator phase transition. As a graduate student she was supported by a UMD Physics Graduate Fellowship and the Cooperative NIST and Chemical Physics (UMCP) Fellowship. She completed her Ph.D. in 2004. In 2005 she was awarded with the ITAMP postdoctoral Fellowship at the Harvard-Smithsonian Center for Astrophysics. The ITAMP Fellowship is a three-year appointment where Ana María will continue her research in atomic physics.