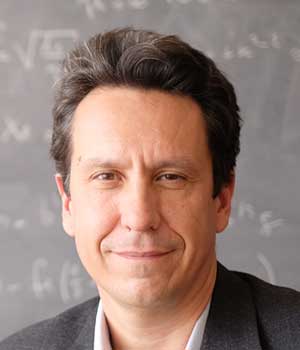 
"For the incisive combination of observation, analysis, and theory to elucidate the beautiful statistical physics problems underlying collective behavior in natural flocks and swarms."


Andrea Cavagna is Research Director at the Institute for Complex Systems of the National Research Council in Rome, and he is also associate member of the Department of Physics of the Sapienza University. Dr Cavagna received his MSc in Physics from the University of Milan in 1994 and his PhD in Theoretical Physics from the Sapienza University in 1998. With a background in statistical mechanics and field theory, he has worked for the first ten years of his career on non-equilibrium glassy dynamics, being among the first to uncover the key role of saddles in the free energy landscape of glassy systems. About fifteen years ago, Dr Cavagna’s research interests shifted to physical biology, as he founded with Irene Giardina the COBBS Lab (Collective Behaviour in Biological Systems). They were the first to collect accurate three-dimensional large-scale experimental data on bird flocks and insect swarms in the field, pushing groups’ sizes from the previous order of ten individuals, to the range of thousands. Dr Cavagna’s research group has discovered the existence of topological interaction and scale-free correlations in bird flocks, as well as near-critical behaviour and dynamical scaling laws in natural swarms. Thanks to these results he was awarded in 2017 an Advanced Grant of the European Research Council. Dr Cavagna’s interest is currently focusing on how to extend the beautiful conceptual framework of the renormalization group to the study of collective biological systems.