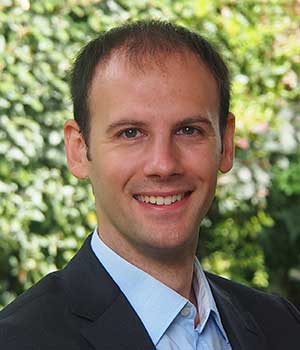 
"For the introduction and development of novel ideas in the theory of Boltzmann transport, including the concepts of relaxons, transport waves, and friction in nanostructures, and their application to the case of hydrodynamic transport of heat."


Andrea Cepellotti earned a B.S and a M.S. in Physics from University of Trieste (Italy) in 2011. After moving to Switzerland, he received a Ph.D. in Materials Engineering at the École Polytechinque Fédérale de Lausanne (EPFL) in 2016. He is currently a Postdoctoral Scholar at the University of California, Berkeley. His research interests in computational condensed matter physics include electronic and thermal transport, surface adsorption and optical properties of solids from first principles. His Ph.D. Thesis focused on the study of collective phonon excitations and phonon hydroynamics. He's a founding developer of AiiDA (www.aiida.net), an open source software infrastructure for computational science. Recently, he received the IBM Research Award, the Young Research Award of the Francophone Carbon Society (SFEC) and the Early Postdoc Mobility Fellowship from the Swiss National Science Foundation (SNF).