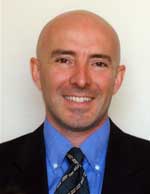 
Dr. Andrea M. Garofalo received his Laurea degree in Nuclear Engineering (summa cum laude) from the Università degli Studi di Palermo, Italy, in 1990. On that year, he was awarded a Fulbright Program grant for graduate studies in the USA, which he took to the Applied Physics Department at Columbia University, in New York. From there, he received his Ph.D. in 1997, with a thesis based on experimental work on the High Beta Tokamak, Extended Pulse (HBT-EP) experiment, supervised by Prof. Michael Mauel. Since completing his graduate work, Dr. Garofalo has been a research scientist for Columbia University, carrying out MHD stability research on the DIII-D Tokamak National Fusion Facility at General Atomics, in San Diego. In 1998 he was awarded a Marie Curie research training grant of the European Fusion Programme, but renounced the grant to continue, on DIII-D, research on stabilization of the resistive wall mode. This work led to the first-time demonstration of stable confinement of plasma pressure at nearly double the conventional free-boundary stability limit in a tokamak. Since then, he has been pursuing the application of this discovery toward the realization of high-beta, steady-state advanced tokamak plasmas. He is a member of Sigma ci since 1997, and of the American Physical Society since 1991.