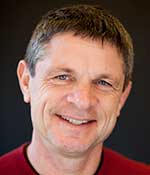 
"For leadership in numerous central developments in string theory, quantum field theory, and quantum geometry; including the interplay between string theory and Calabi-Yau geometry and especially for their elucidation of the origin of black hole entropy from microscopic states."


Andrew Strominger received his B.A. from Harvard in 1977, his M.A. from University of California, Berkeley in 1979 and his Ph.D. from Massachusetts Institute of Technology (MIT) in 1982 under thesis advisor Roman Jackiw. From 1982 to 1987, he was at the Institute for Advanced Study in Princeton. He then joined the faculty at UC Santa Barbara and moved to Harvard in 1997.  He is currently the Gwill E. York Professor of Physics at Harvard University. He is noted for his contributions to the study of black holes, quantum gravity, string theory and quantum field theory. These include his codiscovery of Calabi-Yau compactification and branes in string theory, of the statistical origin of black hole entropy and the equivalence of memory, soft theorems and asymptotic symmetries in quantum field theory and quantum gravity. He also received the Oskar Klein Medal from the Swedish Royal Academy, the Dirac Medal from the Abdus Salam International Centre for Theoretical Physics and the Physics Frontiers Breakthrough Prize from the Milner Foundation. He is a member of the American Academy of Arts and Sciences and the National Academy of Sciences.