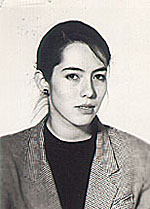 
"Renormalization-Group Theory of Superfluidity and Phase Separation of Helium Mixtures Immersed in Aerogel."


Miss Lopatnikova received her BS from MIT in 1997. Her senior thesis on superfluids in aeogels explained several new experimental features, such as a phase separation between two superfluid phases, a critical point imbedded within superfluidity, and the occurrences of a superfluid phase with very low 4He concentrations. This resulted in the publication of one paper in Physical Review B, as well as a follow-up paper recently submitted. She has been awarded fellowships from both the National Science Foundation and Bell Laboratories to pursue graduate studies in physics at Harvard University.