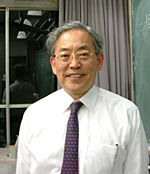 
"For pioneering theoretical insights that pointed the way to the very fruitful experimental study of CP violation in B decays, and for continuing contributions to the fields of CP and heavy flavor physics."


Sanda received his BS degree from University of Illinois in 1965, and Ph.D. from Princeton University in (1969). I was a research associate at Columbia University (1969-1971), and at Fermilab(1971-1974). During the period of 1974-1992, I worked at Rockefeller University, where I held assistant professor, senior research associate, and associate professor positions. Since 1992, I have been a professor of physics at Nagoya University, where I was a chairman of the physics department(1997-1998), and an associate Dean of the Institute for Liberal Arts and Sciences since 2002.

His research interests range from strong interaction to weak interaction phenomenology. Having written a paper on large CP violation in B decays, a large fraction of his time has been spent in trying to have some laboratory build a B factory where the prediction can be tested. He has also collaborated with Ikaros Bigi on 18 papers which eventually lead to a text book on CP violation. Awards include the Inoue Foundation award (1993); the Nishina Prize (1997); the Chunichi Culture Prize (2002); and the Medal with Purple Ribbon from the Japanese Government (2002).