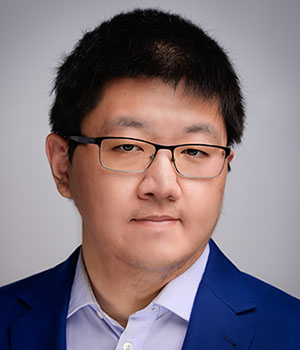 
"For the invention of a novel machine learning algorithm that broke down significant technological barriers with monolithic liquid scintillator detectors and, in turn, delivered the world’s most sensitive search for neutrinoless double beta decay."


Aobo Li is an interdisciplinary experimentalist of artificial intelligence (AI) and neutrino physics. He received his B.S. in physics at the University of Washington in 2015, then went on to do his graduate work at Boston University. There, he was advised by Professor Christopher Grant and received a substantial amount of support from Professor Lindley Winslow at MIT. He did his graduate work as part of the KamLAND-Zen collaboration, searching for neutrinoless double-beta decay with monolithic liquid scintillator detectors. His dissertation formed the early framework of his deep learning algorithm, KamNet, which was a key component in delivering the world-leading search for this decay with KamLAND-Zen 800. After receiving his Ph.D. in 2020, Aobo joined the University of North Carolina at Chapel Hill as a Postdoctoral Research Associate and COSMS Fellow, working with Professor Julieta Gruszko on Germanium detector experiments while maintaining his partial involvement in KamLAND-Zen. Aobo initiated and lead the Germanium Machine Learning (GeM) group, bringing AI solutions to two Germanium detector experiments: Majorana Demonstrator and LEGEND, while leveraging resources to educate domestic and international collaborators to acquire AI experience. His research work and mentorship have recently been honored by the UNC Postdoctoral Award of Research Excellence.