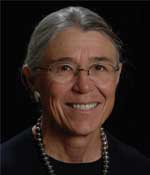 
"For her intellectual and managerial leadership in creating centers that allow international technical and policy experts to explore confidence building measures and other arms control regimes."


Arian L. Pregenzer will retire from Sandia National Laboratories in Albuquerque, New Mexico in December 2011. At Sandia, she was Senior Scientist in the Global Security Program, where her responsibilities included initiating new programs in arms control and non-proliferation and developing strategies for nuclear security that intersect multiple laboratory missions. In 2009 – 2010 she was a visiting scholar at the Center for International Security and Cooperation at Stanford University, where she initiated new research in applying the concepts of systems resilience to nuclear non-proliferation. Dr. Pregenzer is internationally recognized for her work to enable international technical collaboration to enhance security. In 1994 she led the establishment of Sandia’s Cooperative Monitoring Center (CMC), which promotes dialogue between policy and technology experts. In 2003 she worked with the National Nuclear Security Agency (NNSA) and the Arab Science and Technology Foundation (ASTF) to initiate the Iraqi S&T Engagement Program.  Arian Pregenzer has Bachelor’s degrees in Physics, Mathematics, and Philosophy from the University of New Mexico. In 1983 she received a Ph.D. in Theoretical Physics from the University of California at San Diego. She is a member of the Council on Foreign Relations, the International Institute for Strategic Studies and the American Association for the Advancement of Science.