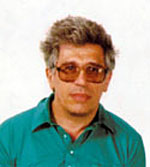 
"For fundamental contributions to the understanding of non-perturbative QCD, non-leptonic weak decays, and the analytic properties of supersymmetric gauge theories."


Dr. Vainshtein is a native of Novokuznetsk, a Siberian city in Russia. He attended the Novosibirsky University and completed his Masters (1964) and Ph.D. (1968) at the Brudker Institute of Nuclear Physics. He continued on with this institution where he spent many years with various increasing research positions and responsibilities. It was during this time that he collaborated with V. Zakharov and M. Shifman at the Institute for Theoretical and Experimental Physics in Moscow.

Dr. Vainshtein's interest in physics from his earliest days of research have been concentrated on the gauge theories of fundamental interactions and remain his main area of his research.